Let’s face it, as long as there’s been science fiction, there have been scoundrels, with each major franchise having that one, iconic scalawag we’ve all adored. From Buck Rogers, the original Lt. Starbuck, or even James T. Kirk, to Malcolm Reynolds and Peter Quill, scoundrels have charmed and disarmed us, elated us and infuriated us. What makes one scoundrel character better than the rest? And who is the best?

For any Star Wars fan, there is no debate: Han Solo.

(WRITER’S NOTE: For our purposes we’re just going to pretend that the Star Wars Special Editions never happened; there was no “shooting first”. Han shot, Greedo collapsed in a pile of charred Rodian, end of story, good day, sir.)

The Han Solo of the original trilogy begins as the quintessential scoundrel; a rogue, rascal, and disreputable. He’s a smuggler, working for criminals, taking orders from just one person: himself. As a man, the witty, sarcastic, and cynical, character Harrison Ford so perfectly brought to life was also, in word, relatable.

That relatability is what has always drawn Star Wars fans to the character. He used humor to diffuse tense situations, got frustrated, banged on things when they didn’t work, relied perhaps too heavily on luck, and otherwise acted as we like to think we would in similar situations. Women were drawn to him, and men wanted to be like him.

But was he really a scoundrel?

Solo, when it came right down to it, reveals to us that he is principled. Scrupulous. Honorable. Mischievous? Sure. Sometimes devious, too, but ultimately honorable.

…and then he tosses a member of Kanjiklub, who he swindled, into the maw of a Rathtar. So, there’s that.

Still… we like him because he’s a scoundrel. There aren’t enough scoundrels in our lives. And he’s ours.

Todd Fisher, brother of Carrie Fisher, in promoting his new … 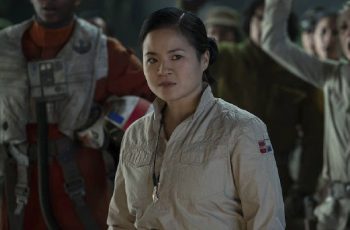 Kelly Marie Tran’s career in Star Wars has been nothing …