#4 – MAKE PLAN; STICK TO PLAN – Fan input is important, but you cant let it control your product.  If you do this you will constantly be responding and changing things.  You will have no consistency and no plan.  Again see the DCEU.

#5 MERCHANDISING – It is sad really.  Star Wars stayed on shelves for four years after Return of the Jedi.  Since its rebirth in the early 90s, Star Wars has been on shelves without hinderance.  Stores have just reset their toy departments for the fourth quarter holiday blitz.  Without a movie for another 16 months, the Star Wars merchandise in the toy aisle was barely 3 peg rows wide.  It was barely there.

Toy sales have apparently been slumping.  While the exact reason goes beyond my abilities, the selection has been horrible.  Solo received next to no merchandising until months after its release.  Lucasfilm needs to find a better way to merchandise the SWU and get their creative butts in hyper mode.

#6 GAMES – Where are the games?!  Video games. board games. You name it and its in short supply.  After al this time the only platform game we have is Battlefront (1&2).  Neither of those went over with huge success, but they were something.  I personally enjoyed story mode on BF2, but where are the adventure games?

There have been a few phone games.  This has been their greatest investment and there have been some fun ones.  I think the best one so far is Galaxy of Heroes, a 5v5 character game where you swap your favorite characters in and out and enhance them.  Force Arena was also fun.  This is the only area where they have put effort.

What about board games and card games? Standard board games there hasn’t been any, but in the collector’s realm they have games like Legion, X-Wing/Armada, and the CCG Destiny.  Disney needs to work on some more mainstream games. Well under the radar (thanks Iger) was the Solo Card Game (aka-Sabacc), but that didn’t go over well. 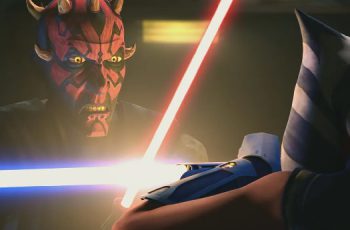 Lucasfilm President Kathleen Kennedy has a lot going on right …