As if we needed more reasons to love the upcoming Spider-Man game for Playstaion, there has been a slow trickle of awesome alternate costume images coming from the game. This week, however, a Reddit user name “Macredblue” posted unconfirmed images of the costume selection screen. This leak provides glimpses of some fantastic easter-eggs hatching through all of Spider-Man’s long history and, if true, sent my heart web slinging across my chest in greater anticipation for Insomniac’s Spider-Man on September 7, only on the PS4.

Ok, so let’s break down what we have.

1- The Base Game’s Suit. Looks good, the big white Spider on the front gives it away. This suit will become comic cannon in Spidergeddon #0 where we will find out what Earth this Spidey is from. (Earth-TBD) I like it, but let’s get to the goods already

2-A Torn Up Suit. Now I might be wrong here, as there have been many a-torn Spider-suit in the comics, but this looks suspiciously like the Tobey Maguire’s 2002 film suit and tears.(Earth-96283).

5- The Scarlet Spider, originally from The Amazing Spider-Man #149, Spider-Man’s clone, Ben Reilly, would go down in history as one of the worst Spider-man story-lines ever (Earth-616).

6- Spider-Armour V.2 from Amazing Spider-Man #656. Peter designs this suit when he lost his Spider-sense so he could be bullet proof. He fought Massacre and, thankfully, this outfit was quickly forgotten (Earth-616).

8- The Spider-Man: Homecoming suit Tom Holland wore is one of my tops right now!!! Love the black on the arms- can’t wait to play this one (Earth-199999).

9- Negative Zone Spidey here can be identified by his Funko Pop figure and is from the game as one of the main villains is Mr.Negative (Earth-TBD).

10- Electro-Proof Spider-Man from Amazing Spider-Man #425 in 1997. Shockingly, he wore this when fighting Electro, one of the first villains you fight in the game (Earth-616).

11- Spider-Punk, The Anarchic Spider-Man, Spider-Man of  and the first on this list who is NOT Peter Parker underneath the mask! First appearing in The Amazing Spider-Man vol. 3 #10 in 2014, Hobart Brown is an African-American punk rocker who starts a revolt against President Norman Osborn. This is also one of the few suits already announced by Insomniac (Earth-138).

12-I’m not 100% sure on this, but most of the net seems to think this is Kaine Parker from Web of Spider-Man #119. He’s a clone from the Clone Saga, a terrible idea taken waaaaay to far in Spider-Man lore (Earth-616).

13- Fear Itself Spider-Man, another pull from a terrible story arc. In Fear Itself #7, Tony Stark and Dwarves of Nidavellir built Spider-Man this suit with gauntlet blades and infused it with Uru and Asguardian-ness. Look, the comic was awful. why are we doing this to ourselves (Earth-616).

14- The Stealth Costume, otherwise knows as the “Big-Time” Costume (ugh) came from The Amazing Spider-Man #649. Peter built it to defeat the new Hobgoblin. It makes him hard to see and quiet (Earth-616).

15- Ends of the Earth Spider-Man Suit, when Doc Oc reformed the Sinister Six in The Amazing Spider-Man #682, Spidey figured he needed some extra protection, so he came up with this Knight look.  Personally, I would have preferred Spyder-Knight from the Ultimate Spider-Man Animated Series, but ya know (Earth-616).

17- The Iron Spider from Civil War, it first appeared in The Amazing Spider-Man #529 and was also seen in Infinity War (Earth-616).

18- This is the Velocity Suit and was seen in previous teases for the game (Earth-TBD).

19- The Ghost-Spider, a combination of Ghost Rider and Spider-Man, from Amazing Spider-Man Annual #38 in 2011. This universe’s Spider-Man never saw the loss of Uncle Ben, and instead helped Peter train to become the hero, the Amazing Spider. Except he was actually killing other Spider-Men across the universes and stealing their powers. Dr.Banner, the Sorcerer Supreme of that world, infused him with cursed magic and he became the Ghost Spider. The animation with the flaming head possible could make this outfit the coolest one yet (Earth-11638)!

21- The suit I am MOST excited about, Spider-Man: The Animated Series, the 90’s cartoon texture on this looks fantastic, and I can’t wait to see it in action against a realistic NYC (Earth-92131).

25-Not gonna lie… I can’t identity this costume…even with the strange NY in the corner.  Hmmmmm….

28-Blood Spider Suit from Amazing Spider-Man #367 was Michael Bingham, trained by the Taskmaster to fight in Spider-Man’s style he seemed to posses similar powers.

So it seems like a promotional image for the Spider-Man … 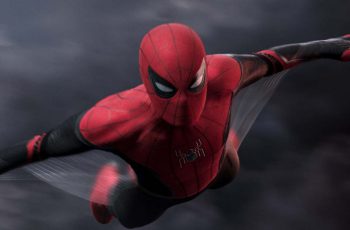 Professional artist Lee Bermejo took to Instagram to express his …