In some ways, both Jar Jar and the Republic suffered the same manipulation and betrayal. Palpatine’s machinations behind the Senate scenes, with the Separatists, Trade Federation, and Banking Clan, all steered the Republic towards its inevitable downfall. His manipulation of Jar Jar Binks was far more direct. I’ve already theorized that Palpatine manipulated Anakin Skywalker’s mind. Honestly, I don’t think that was necessary with Jar Jar. His lack of sophistication was enough for him to fall under Palpatine’s spell and propose the vote of no confidence in Padme’s absence.

From that point, it was over, both for Jar Jar Binks and the Republic. A war would begin; a war for power, control, and the fate of the future. As Palpatine would betray the Republic, so too would he betray Jar Jar, stripping each of the thing held most dear. In the Republic’s case, it was its democracy and freedom; in Jar Jar’s, his adopted family. As the citizens of the galaxy watch the Republic die, Jar Jar watches all that he loves die as well.

First he loses Anakin to the Emperor and the Dark Side, and then he suffers immeasurable loss with Padme’s literal death. He, like the Republic, is now crushed and defeated.

For me to see Jar Jar Binks as an allegory for the fall of the Republic? That was as much of a surprise to me as I’m sure it is for you. Still, when you break it down, the comparisons are not only there, but obvious. Was that George Lucas’s intention all along? Perhaps. Was there a better way to present such a parallel, with a less cartoonish-ly foolish character? Certainly. But now I see Jar Jar in a different light.

I still don’t like him, but I think I now understand him a little better. 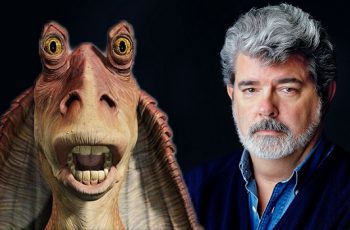 Star Wars Celebration concluded on Monday with a 20th anniversary …

Love or hate for the Star Wars prequel trilogy falls …