It appears that Electric Art’s stock prices have dropped 10 percent since they announced that their upcoming first person shooter Battlefield V has been delayed.

EA officially announced on Thursday that they will be delaying Battlefield V from it’s original release date of October 19th to November 20th. DICE’S general manager Oskar Gabrielson has claimed that after players had a hands on experience with the game at Gamescom 2018, DICE wants to take more time to implement changes suggested to them by players who provided them with feedback following their hands on experience with Battlefield V.

Game delays usually have a lot of controversy surrounding them but they usually mean that the developers will have more time to refine the player experience. However recent sale projections have told us that Battlefield V pre-order numbers are significantly lower than Call Of Duty: Black Ops 4 and Red Dead Redemption 2. These two titan video games were in direct competition with Battlefield V in it’s original October 19th release slot, so you can infer that EA wanted to move the release date to a less crowded window.

Now Battlefield V only has to contend with Fallout 76 which is coming out November 14th, 6 days before the release of Battlefield V.

In a recent earnings call, it was announced that following the delay of Battlefield V on Thursday, EA’s stock prices dropped 10 percent. This is not a good sign of any studio looking to release a big game in the holiday period however it seems like the controversy surrounding this game is also to blame.

With women being a big presence in Battlefield V, many players have expressed their distaste for an inaccurate representation of WWII (when Battlefield V takes place). Mix this with the terrible reception from higher ups at EA and DICE in response to the audience has surely not helped this game either.

Battlefield V’s open beta will launch on Thursday September 6th and after the beta we may see a surge in game pre-orders due to a lot more people being given the opportunity to get their hands on the game and try it out for themselves.

Battlefield V will officially launch on November 20th 2018 on PS4, Xbox One and PC. 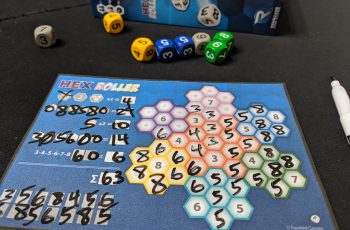 The roll-and-write trend shows no signs of slowing down. Designers …
Starting next week on Wednesday, EA’s Star Wars Battlefront II …