When it comes to Star Wars, Hasbro has certainly had a busy summer. The industry giant kicked things off at Comic-Con International in San Diego back in July. There, Hasbro announced that it would be greatly expanding it’s already popular Star Wars Black Series. Additions were coming to the Vintage Collection as well. Since then, the toy maker hasn’t slowed down.

The latest in the Hasbro’s Star Wars collection? Another character from Solo: A Star Wars story joins the Star Wars Black Series, and perhaps the most recent character of the Star Wars saga to grace the Vintage Collection. Welcome to immortalization in toy form, Dryden Vos and Captain Phasma. Well, in Phasma’s case, welcome back.

Paul Bettany didn’t exactly convey the same intimidation we’re used to in a Star Wars villain. Still, Hasbro offers a 6” Dryden Vos to compliment the rest of the Solo: A Star Wars Story figures of the Star Wars Black Series released earlier this year. Flickering Myth presented us a glimpse of the official Hasbro promotional photos.

It’s not clear if Hasbro utilized its PhotoReal process in creating the figure as it did with its release of the Princess Leia – Boushh Disguise figure. A close look at the photos, however, suggests that it did; the likeness is surprisingly accurate.

Hasbro including Phasma in the Vintage Collection is a bit of a head-scratcher. Don’t get me wrong; the figure is exemplary in its detail:

That it’s included in the Vintage Collection is the surprise. Despite this summer’s focus on the character, it now appears that Gwendolyn Christie’s Phasma did indeed meet her end in The Last Jedi. Why else include the character in the Vintage, rather than current Star Wars Black Series collection?

We’ll still see Phamsa again, however, only in animated form. Trailers for the new animated Star Wars: Resistance series have already confirmed that. If that’s not good enough for you, well, at least there’s a new Phasma figure.

Both the Dryden Vos and Captain Phasma figures will be available in early 2019. 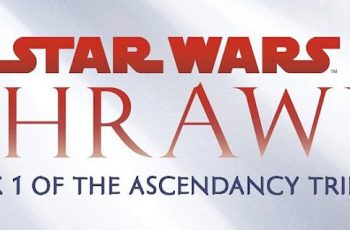 Let’s get right to it, shall we? Lucasfilm Publishing dropped …
Between media-types (I include myself in that category) and Star …