Avengers 4 is starting reshoots this week and on-set photos of Chris Evans, Paul Rudd, and Scarlett Johansson have appeared online (Just Jared).  Avengers 4 is the highly anticipated sequel to this year’s summer blockbuster Avengers: Infinity War.  The film is directed by Anthony and Joe Russo and will hit theaters May 3, 2019.

On the set in Atlanta, Chris Evans, who plays Steve Rogers aka Captain America, is casually dressed.  He is wearing jeans, a button-up shirt, and a pair of sunglasses.  When audiences last saw him in Avengers: Infinity War, Captain America was wearing a uniform that had seen better days and sporting a thick “fugitive” beard.

So, his new clean-cut appearance points to a world that has moved on from the massive tragedy Thanos caused.  It also suggests he is no longer a fugitive from his own government.

Paul Rudd, who plays Scott Lang aka Ant-Man, is also walking around in jeans and a button-up shirt.  For those who missed Ant-Man and the Wasp, Scott Lang was last seen floating free in the Quantum Realm.  The attack by Thanos had wiped out his support team.  So, Scott seemed trapped there.

Ant-Man’s appearance with Captain America and Black Widow means someone helped him get home.  A bunch of hi-tech equipment was just sitting on top of a building in San Francisco, so SHIELD may have been called in.  Bill Foster, the former partner of Hank Pym, was a former SHIELD science advisor.  He may also have come looking for his friends.

Scarlett Johansson, who plays Natasha Romanoff aka the Black Widow, is hidden behind the glass door of a diner.  The diner is probably where she, Cap, and Ant-Man will meet up to discuss a plan to defeat Thanos.

The Black Widow is wearing a dark top and pants and now has strawberry blonde hair that goes below her shoulders.  At the end of Avengers: Infinity War her hair was a lighter blonde and just above her shoulders.

The longer hair is another indication Avengers 4 takes place a good deal after the last film.  Natasha is a trained spy, so the hair could be a disguise.  However, the character has never used a wig in any of her previous appearances.

A man wearing a motion-capture suit was also seen on set.  Suits like that are used to record a person’s movements so they can be used for a computer-generated character later.  The ordinary location of a diner seems an odd place for a CG person like Rocket Raccoon or Groot.  Is he standing in for a known character or someone completely new? 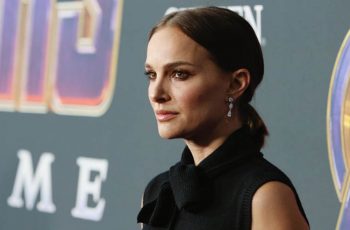