For those of you who actually went and saw SOLO: A STAR WARS STORY in the theaters this past May, you were in for a HUGE treat at the end of the film. Now if you haven’t seen the film yet well then you contributed in making SOLO the biggest flop in the STAR WARS universe to date and at the same time missed the most exciting cameo in a STAR WARS film since N-sync in Attack of the Clones!

In the final moments of the film, Qi’ra calls her actual boss in Crimson Dawn, the ever bad ass DARTH MAUL. This was honestly a HUGE surprise that no one at Hashtag saw coming, and it’s since lead to tons of theories and speculation of more Darth Maul in future films or series. Where in the Star Wars timeline are we? Are those metal legs?? We have to get a final duel between Kenobi and Maul now right? I can go on. Until then Disney decided to drop some awesome pictures Darth Maul to promote the Blu-Ray and Digital release of SOLO in a couple weeks. Check them images below.

If you’ve lived under a rock and never seen a single episode of The Clone Wars then you have no idea that there’s an actual arc that explains how Maul survived being cut in half by the hands of Obi-Won Kenobi. From crazy metal spider legs, to more stylized robotic legs in Rebels, Maul has evolved in the past few years to a even more bad ass character than when we last saw him in Episode I. In SOLO you get a quick shot of his legs, but with these pictures we can see the details in all their glory.

“I found out last June/July when we were in Guatemala,” Darth Maul actor Ray Park told Forbes. “I got the phone call from Lynne Hale from Lucasfilm. And it was really nice of her, because she said to me ‘Ray, we’re just calling to see if you would like to do it.’ And I went [inhales slowly] ‘Yeah. Do you want me on the plane now?’”

Do you think we’ll get more Maul now that his return has been established? If there is ever a Kenobi solo film made I really hope we get to see this Maul in all his glory, and not just for 2 minutes at the end of the film. 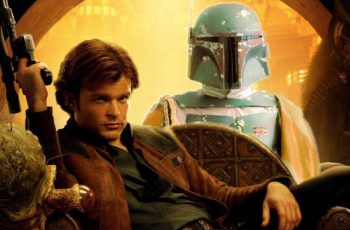 From the moment Lucasfilm announced that it was making Solo: …
Has Disney fired Kathleen Kennedy? From a certain point of …