Other than a few featurette’s and photos from the set, not much has been heard about the new Predator movie directed by Shane Black. Honestly other than Black directing, the film really doesn’t peek my interest. Who know’s, it might be an incredible action/Sci-Fi film for all we know. Now if you’re interested in seeing the film when it releases on Friday, you can go on a discount.

A joint promotion with Atom and T-Mobile gets you tickets this weekend for only $4!!! That’s less than a bucket of popcorn! That’s less than a box of red vines! The promotion is a part of T-Mobile Tuesdays, so if you are a customer of the cell phone service, you can download the T-Mobile Tuesdays and Atom apps to get the deal.  Sign up soon though, there’s limited quantities. Check out the latest scene to be released below!

From the outer reaches of space to the backwoods of southern Georgia, the hunt comes home in Shane Black’s explosive reinvention of the Predator series. Now, the universe’s most lethal hunters are stronger, smarter and deadlier than ever before. And only a ragtag crew of ex-soldiers and an evolutionary biology professor can prevent the end of the human race.

After several weeks with little change in the box office … 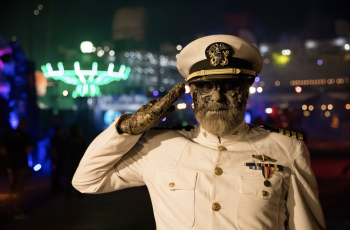 For ten years now the Queen Mary in the Long …