One of my favorite tasks of the week is trying to figure out how to write up whatever crazy notion Joe and Ro come up with on Star Wars Fanatics. This week is no exception. The hot topic lately has been Star Wars theory. From Matt Smith playing Thrawn, to Luke appearing as a Force ghost, to Rey really being Luke’s offspring, there’s a Star Wars theory for everyone. Now we have one about Shmi Skywalker.

This week’s challenge stems from a comment made on Sunday night’s show. The task? Create a narrative in which Anakin Skywalker’s mother was either a Jedi or a Sith…. And in which she was killed by the Sand People in order to push Anakin to the dark side.

Ok, Let’s start here: Shmi Skywalker was not a Jedi. She wouldn’t have hidden that fact from Qui-Gon and Obi-Wan; there’d be no reason to. So that leaves Sith. However, it would take an awfully powerful Sith to conceal the dark side in her so fully that the Jedi wouldn’t detect it. Only Sidious/Palpatine was strong enough to do that. That’s not to say she wasn’t connected with the Sith, though.

Was Shmi Skywalker Secretly a Sith?

Here’s the narrative as I see it: Shmi Skywalker develops a relationship with a Sith. She loves him, but he grows too powerful. Fearful, she plans to flee with their unborn child. This Sith, however, presented a challenge to the rising Darth Sidious. Sidious steps in, murders the Sith, and manipulates Shmi Skywalker’s mind (as he would later do to her son). She loses all memory of the relationship.

Fast forward several years to Tatooine. Shmi has given birth, and unexpected events lead Qui-Gon Jin to Anakin. Sidious believes the boy must be trained as a Sith and sends Darth Maul to eliminate the Jedi. When that fails, he must allow Anakin’s Jedi fate to play out… until the time is right.

Sidious Murders Shmi… From a Certain Point of View

Sidious waits until Anakin is older and most susceptible. Then, he orchestrates Shmi’s capture and torture at the hands of the Sand People. Sidious knows Anakin will not be able to contain his rage. Anakin thus murders an entire village, and is set firmly on the path to the dark side from there.

Sound far-fetched? Perhaps. Perhaps not. Shmi Skywalker being a Sith, or Sith acolyte, is at least slightly more believable that midichlorians and immaculate conception.

So there you have it. Shmi Skywalker was a Sith (or Sith sympathizer), and Sidius orchestrated her death. It was all part of the plan to push Anakin to the dark side.

Breaking news from Collider is reporting production on all “A … 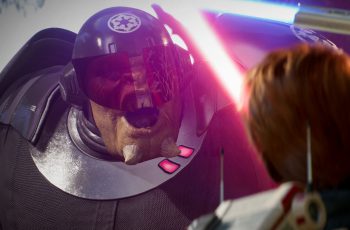 The flood of Star Wars has begun. Last week we …