Dick Tracy is the best cop around, but what happens when he goes after the wrong criminal?  Find out in Dick Tracy: Dead or Alive #1,

It is no exaggeration when people say Tracy is the best cop around because he has been around and he is the best.  He has been kicked out of many police departments. Every police chief around knows of his reputation. Tracy has a reputation for being a loose cannon and playing by his own rules.

This time is no different for Tracy.  G. Jepson Peepers is a software mogul who is the prime suspect in a case.  Peepers is on the run, but with Tracy on the case there is no escape.

After the arrest Tracy is called into his bosses’ office  and is reprimanded for arresting Peepers. “Some people you just don’t arrest” is what Tracy is told.  Peepers golfs with two ex-presidents and his arrest has caused waves. Tracy is forced to turn in his badge and lose his job on the force.

However, Tracy didn’t become a cop for the for the career or the pension.  Tracy is a cop to put away the bad guys of the world so he happily turns in his badge.

Shortly after in Chicago the crime boss known as Big Boy meets with his corrupt officials.  Somehow a straight governor was elected and the last thing Big Boy needs is an official he doesn’t own.

Big Boy comes up with a plan to hire Dick Tracy to clean up the town.  They give him some low level criminals and eventually once he has made a name for himself the governor dies.  They make Tracy the patsy and he takes the fall for the murder. However, can this plan work when they are trying it against Dick “F’n” Tracy?

I know basically knowing about Dick Tracy other than I saw the movie when it first came out a million years ago.  Also I know it was a radio drama and pulp comic strip.

I thought he was just an everyday cop who was really good at his job.  However, I was so wrong. Tracy is on a whole ‘nother level. He is a no nonsense cop who only cares about taking down the bad guys no matter who he makes mad.  The way he talks is awesome with his witty comebacks. An example is when he asks his boss for a list of who he isn’t allowed to arrest to keep in his wallet.

When I looked up the writing and art team behind the issue I was really excited to see Mike and Laura Allred’s names involved.  I absolutely love their art. However, when I looked closer I saw Mike did not draw it and only did the writing. It isn’t all bad though because Laura did the coloring and she is excellent at it.

This is a great little story and comic.  I am not sure how the story structure will playout in the series.  This has an open ended ending so it may be a long continuous story or it could be single issue stories with an overarching story.  I honestly don’t care either way because I really enjoyed the issue.

Dick Tracy: Dead or Alive #1 is a fun little pulp detective story with a modern style.  This is a great little quick read to have fun with on a lazy day. 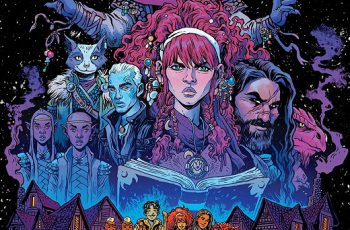 The first issue of IDW's Dungeons & Dragons: A Darkened … 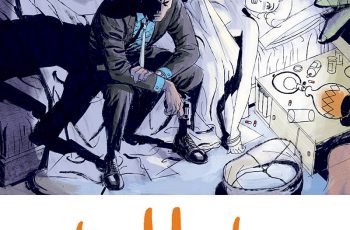