SHATTERED GRID is over. And now a new team of Power Rangers must rise. A new era begins as award-nominated writer Marguerite Bennett (Batwoman, Animosity) and artist Simone di Meo (Doctor Who: The Tenth Doctor) introduce an all-new Power Rangers team unlike any other! What is the secret behind this new team, and what ancient evil threatens the future?

After the stunning conclusion to the hit comic book event Power Rangers: Shattered Grid, an all-new, all-star team of Power Rangers is drawn together from across time and space to combat a never-before-seen evil. As they fight to prove to themselves and each other that they have what it takes to survive in a dangerous new environment, these iconic Power Rangers must defeat the onslaught of an unfamiliar, terrifying new villain.

MMPR #31 is the beginning of a new story arc, however, it is definitely reliant upon the reader being versed in what came before it. If you didn’t read Shattered Grid, you will be extremely confused about what exactly is happening in this issue. I would not recommend this comic as a jumping on point if you’re interested in starting to read the series; you should absolutely go back and read Shattered Grid first.

That being said, the storytelling here is great, it sets out Rangers in a new environment where they are confused and unsure about their future. Are they stuck here? Is there a way out? Will other beings they run into be friendly or dangerous?

By the end of the issue, you’re not ready for it to be over and are now resigned to impatiently waiting for issue #32.

The artwork in this new series is from a new team, so it stands to reason that there would be a style change, but instead of just a slight difference; the stark tone of the story takes shape in the new art direction as well. Some of you may not like it, if only for the fact it’s not what you’re used to, but regardless of your feelings about it, Simone di Meo brings a new edge to the characters that perfectly fit the story Marguerite Bennett has created.

My recommendation is that if you are caught up on the series, you’ll definitely want to keep reading but if you’re new to the series, this book is definitely not for you. Pick up the back issues and catch up on the story first.

Catherine Allingham is a private eye with no mystery she … 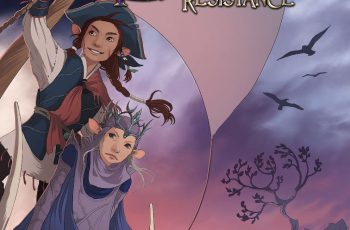