At 13 years old Nina had a vision of an upcoming earthquake, but that is not the strangest thing which happened to her that night in Blackbird #1.

She sat on the couch with her sister, Marisa, waiting for the earthquake which looked like it would never come.  However, when it did it was a 7.1 on the Richter scale and her family all ran outside.

Nina and her sister ran and ran with light poles falling around them.  They took shelter under a freeway overpass. However, the overpass began to crumble and chunks fell around them.  The two sisters made it through the earthquake unharmed because a giant blue lion protected them.

After the earthquake a spirit went around to all the people who saw the lion and told them to forget what they saw.  Everyone forgot what they saw that night, but for some reason Nina did not. She remembers everything she saw.

The earthquake caused two great changes in Nina’s life.  First she could not stop talking about what she saw and no one believed her.  However, the second was a lot more impactful. Nina’s father was not at home and this exposed a possible affair.  This lead to her mom being in a car accident and dying shortly after. The loss of her mom is something Nina has not fully recovered from even 10 years after.

Nina is now 23 and lives with her sister, but Nina is addicted to drugs and barely has the motivation to work.  She is obsessed with magic and monsters because of what she saw during the earthquake. However, her sister doesn’t remember any of it.

One night Nina gets a glimpse into magic and it sets her on a journey into magic to discover what she saw and save someone close to her.

I like where this comic is going.  The magic aspects have a lot of potential.  It is unclear how the story will unfold as far as what type of magic story it is.  Nina has a lot of magic in her so she will have to unlock that, but is this going to be a magical quest into a different land or a journey into the magical world around us?  Either way I am interested in seeing where this story goes.

The art in this issue is very visually appealing.  It is very colorful and bright. The bright art gives me hope this story will be more whimsical rather than dark and gory like recent magic comic Maestros.  I want a hopeful look into magic and the good it can bring into the world.  This comic looks like it may go into that direction.

A good start into a new series.  It is too early to really get a feel for what the comic will become, but so far so good.

Cover by: Bartel and Fiona Staples

A man is captured by a hostile military and interrogated, … 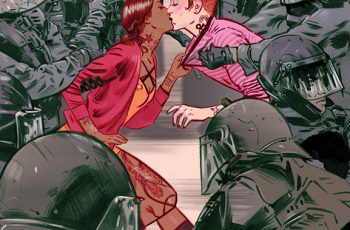