In Venom, Tom Hardy plays a character who now hears a new voice in his head, because of an alien symbiote.  The actor also has a reputation for being highly focused and intense.  When asked if he researched mental illness like paranoid schizophrenia, he said, “No, no, I didn’t. I don’t see necessarily, apart from armchair-psychology, sort of conversation about potential delusional behavior or inner voices.  There was nothing which was specificity designed to reenact any semblance of mental health in that aspect.”

Hardy continued, “So, any comment in that, in that area at all would be glib. However, I have an inside voice personally and my own mental health issues which was very simple to draw upon. That part of me which is nourishing or less nourishing in my actions. And then it was just to personify the one that didn’t really care, the chaos, or the self will run riot.  Which is symbolized in Venom, who’s actually a pretty quite innocent and naive creature in many aspects, but also incredibly advanced because he’s from outer space.  We can imbue him with a much higher-powered intelligence if you wanted to. But primarily on this planet, it’s really about, ‘What do I eat, where do I sleep.’  And it really broke it down very simply.”

Talking more specifically on the Venom symbiote, Hardy said, “But how you see that interact with a human being with an ethical framework, trying to negotiate the terms of his inner landscape, has a tortured neurosis about it, which I find funny. As opposed to what you’d describe as schizophrenia.  I would say it was more the embracement of tortured neurosis, which is hysteria, and some of… an emotional imbalance. And therefore there’s a more humorous palette.  Although that is a legitimate suffering of people, who do have neurosis, and I’m not making fun of, or being glib either.”

The box office success of Sony’s Venom means that their … 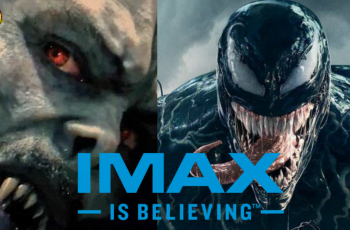