Both the New York and San Diego Comic-Cons are always exciting times for Star Wars collectors, this year was no different. Over the course of the two conventions, Hasbro gave us our first look at some of the figures and role-play items set to release throughout 2019. Here is a look at these figures and role-play must haves. 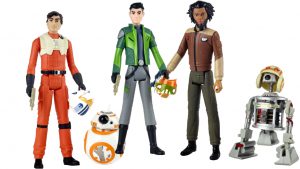 With this weekend being the debut of Star Wars Resistance, Hasbro has given us our first look of the figures for this series. The new 3.75-inch figures will feature new characters including Katz Xiono, Commander Pyre, Jarek Yeager, Major Elrik Vonreg, Synara San, and Torra Doza. We also get a couple of familiar ones, Poe Dameron and a First Order Stormtrooper.

If you are a Black Series collector Hasbro has given you plenty of reasons to open your wallet. Hasbro is giving us a pair of new Black Series 6-inch figures: General Grievous and Clone Wars Obi-Wan Kenobi. General Grievous will retail for 29.99 and will be available in the Spring of 2019. Obi-Wan Kenobi in Clone Trooper Armor will retail for 19.99 and will be a Walgreens exclusive.

Not only are we getting the new 6-inch Black Series figures, Hasbro is also producing an Archives line. The Black Series Archives line was announced this year at San Diego Comic Con. We got our first real look at these figures in New York. The first wave of these figures will include Luke Skywalker in his pilot outfit, Boba Fett, Bossk and IG-88 to be released in spring of 2019. The second wave to be released in the fall of 2019 will include Scout Biker Trooper, Yoda and Anakin Skywalker that comes with the Darth Vader face.

If you are into the vintage look of collecting, Hasbro is also releasing a new wave of their vintage collection line. This line will include Leia Boushh, Scarif Trooper, Klaatu, and Yakface figures.

Hasbro wasn’t done there, however. At its panel on the last day of Comic-Con Hasbro revealed some other new additions that we’ll tell you about in another story.

Don’t worry cosplayers, the company hasn’t forgot about you. Be ready to hold the resistance at bay with the Riot Control Baton. This baton will come with a real metal handle and have movie accurate sounds. We will also be getting three new lightsabers as well. 2019 will mark the 20th anniversary for the Star Wars prequels. For this Hasbro will be giving us Episode 1 Obi-Wan and Darth Maul lightsabers and the one everyone has been waiting for Mace Windu’s lightsaber. They are now available for pre-sale at Entertainment Earth. 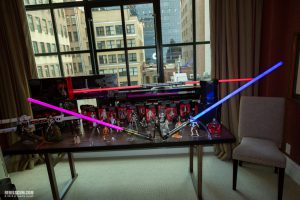 So, 2019 looks like it will be an exciting year for Star Wars collectors. What items are you most excited about? What other releases would you like to see Hasbro do? Let us know by leaving your comments or hit me up on twitter @starwarsnerd574.

Never be afraid to ask for help. #22aday

[…] on it. Star Wars has easily become one of the most recognizable franchises out there. You can find action figures, ships, models and even underwear. But one collecting fad that has been picking up the last few […]