Time to talk about another Star Wars game!  Today’s game is the first of two table top games – Star Wars X-wing Miniatures.  Play your favorite snub fighters and light cargo ships in head to head battles.  This game really tests your piloting abilities as well as your luck.  It is one thing to line up the perfect shot.  It is quite another to have the dice cooperate with you.

Getting things going for a game of X-wing depends on how much pre-thought has gone into the game.  If you go somewhere knowing exactly what you are going to run or what the parameters will be, set-up is fairly easy.  If you bring everything you have and decide on scenarios when you get there, set-up takes a bit longer.  With most games you have to pick armies, you have to choose a point total.  That total takes into consideration the ship, its individual type cost, and any extra abilities you add to it.  That is the hardest part.  Once you have your ships and their cards selected, you simply place the ships in your starting zone how you choose, and you are ready to go.  The only other thing that might be used are flat asteroid tokens that can be placed in play.

Gameplay is really straight forward.  Think of it like real flying.  It is very easy to learn; if you move the stick this way – this happens.  Push this peddle – this happens.  That does not mean you are ready to go out and perform barrel rolls and 4G turns.  X-wing is the same.  Simply take your maneuver dial, set it next to your ship, and you are ready to go.  Move your ship, and then if you have an enemy ship in your targeting sights, you roll the dice.  You bank left to line up the opponent’s TIE fighter.  Are you sure they are going the same direction or are they going to go hard the other way?  You must be able to anticipate where your opponent is maneuvering.

The maneuvering in the game uses templates you place at the base of the ship.  There are a few distances and then either straight, casual turn and hard turn.  What the ship can use is printed on their speed dial and varies per ship.  The faster ships have more long distance moves and hard turns. This can make maneuvering with enemy ships challenging.

You also need to consider the dice.  Each ship rolls several attack or defense dice based on what type of ship it is.  Heavy guns means you throw more attack dice.  If you are maneuverable you get more defense dice.  Did you maneuver just set up one of your ships with 2 attack dice vs a ship that has 4 defense dice?  Generally, won’t work well for you. Then again, you can throw four attack dice against one defense die.  The dice roll, and you end up with blanks. That is the frustrating part of this game which can’t be helped.  In the new 2.0 that has been released, the force can now play a factor in the game.  It alters dice and helps with other cards.

The quality of X-wing is through the roof.  Each ship is beautifully crafted and highly detailed.  This game is worth buying the pieces just to collect and display.  You have ships you would expect like x-wings, TIE fighters, Slave 1, and the Millennium Falcon, but it has legends ships from all over the galaxy, the Bounty hunters’ ships and more.  The selection is very diverse.  Since you buy each ship in its own blister pack, you know what you are buying and buying what you want.  At $15 per snub fighter, the cost is good.  Bigger ships cost more but are still in line.

The ability/ship cards are on good stock even though they will not be worn very much unlike in a card game.  The dials and maneuvering templates are nice and thick.  There is no board as you simply play on a smooth surface.  There are game mats you can buy to play on.  The dice are also of a comfortable weight and quality.

The base box for this game does a nice job of holding all you need to a point.  The storage keeps everything in piles.  The ships have their own compartment to be thrown in.  The problem is the more ships you get, you eventually will outgrow this box.  The nice thing is there are several companies that make foam trays where each type of ship has its own cut out (or use generic squares in the tray).  This makes storage and transportation much easier.

Has Disney fired Kathleen Kennedy? From a certain point of … 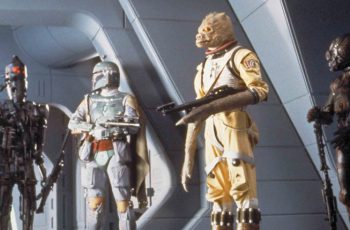 Alan Harris, known for playing the Bounty Hunter Bossk and …