Share
Tweet
0 Shares
Last Sunday, Doctor Who debuted Jodie Whittaker’s iconic first episode as Doctor during a worldwide simulcast. BBC AMERICA’S new season of Doctor Who drew 1.4 million viewers for the global premiere. Doctor Who now ranks as the fastest growing drama on TV this year with a +48% increase over the previous season premiere in Nielsen live/same day ratings. The new season is now Certified Fresh on Rotten Tomatoes. Whittaker’s premiere more than doubled Peter Capaldi’s final episode, while exceeding the debuts of David Tennant and Matt Smith. Despite some grumbling on the internet about a feeling of forced inclusiveness, the show’s season 11 premiere debuted with overwhelming positive reactions. Both critics and fans feel content with the season opener and the over all direction of the show.

Jodie Whittaker’s performance as the 13th Doctor was absolutely phenomenal! Her portrayal of the Doctor calmed any worry of the show having lost it’s way. You could tell the team behind the show understood what the important elements of being “The Doctor” are. Her memory loss felt very much like what happened to the 8th Doctor in the 8th Doctor Movie. He also has some idea of who he was. But it wasn’t all there until the end. Her physical comedy was comparable to Matt Smith’s as the 11th Doctor. The scene in which she is sleeping on the couch and trying to heal was similar to David Tennant’s first episode as the 10th Doctor. The 10th Doctor was also known as a bit of an inventor. In this episode we see the 13th Doctor build her own sonic screwdriver out of melted spoons and alien technology from her enemy’s space craft. The sonic is usually made by the TARDIS. But since the TARDIS was missing this episode, the Doctor had to build the sonic herself. Yet even though everything from the show runners to the cast is new, it felt like good old Doctor Who. In what seems to be a call out to those skeptical of change, the Doctor gently reminds the audience about the beauty that can come from change. “…’cause we’re all capable of the most incredible change.  We can evolve while still staying true to who we are.  We can honor who we’ve been and choose who we want to be next.”. The show even goes as far as seeming to comfort us when The Doctor states ““Don’t be scared. All of this is new to you, and new can be scary. Now we all want answers. Stick with me — you might get some.”

We love a full TARDIS team! This episode had the Doctor fighting along side 4 new friends from Sheffield! Yasmin Khan, Yaz to her friends. is a police cadet in her second year probation. Yaz, played by Mandip Gil, seems bored of the mundane tasks she has to perform. She actively seeks more challenging assignments. This puts her right in The Doctor’s path as she is sent to investigate Ryan Sinclair’s phone call to the police about a misterious object he has found. The episode opens with new friend Ryan, portrayed by Tosin Cole, posting an emotional YouTube video about this amazing woman he has just met. Viewers may have assumed this was in reference to The Doctor. Sadly, it is not, and in fact is a reference to his Grandmother Grace O’Brien, played by Sharon D. Clarke. Ryan’s Youtube video is actual a tribute to Grace after she dies trying t help the Doctor and her friends defeat the Stenza warrior and is creature. This leaves Ryan Sinclair alone with only Graham O’Brien as the closest thing to family that he has left. Bradley Walsh plays Graham O’Brien, new friend to the Doctor and Grace’s second husband. Will this loss unite Ryan and Graham? Will Grace’s memory and adventurous nature encourage them to travel with the Doctor? Will Ryan endure even more suffering and loss this season if it is revealed that Graham’s cancer comes back? Seeing the Doctor stay for Grace’s funeral showed how the Doctor is evolving. Rarely do you see the Doctor stay behind. The Doctor usually swaggers in the TARDIS and not much though is given to those left behind. But this time, they Doctor is there for comfort and to teach them what she can to help them cope with their loss. “I carry them with me, what they would have thought and said and done, made them a part of who I am. So even though they’re gone from the world, they’re never gone from me.”-13th Doctor in reference to the family and friends she has lost.

There was some concern over the fact that this season wouldn’t see any familiar monsters from the Who universe. But Stenza warrior “Tim Shaw” played by Samuel Oatley showed up in true Doctor Who form. From his super gross tooth face (Is he the tooth fairy?) to his lying and cheating ways, he was no match for the new TARDIS team. In true Doctor Who style, the Doctor allows her alien foe the chance to run! When he decides instead to fight, the Doctor reveals to him exactly why they call her “The Oncoming Storm”. This episode was a little bit darker than we had seen with previous Doctors.

The TARDIS & Lack of Opening Sequence
WHERE IS THE TARDIS?! The episode ends with a cliffhanger. The Doctor has still not found her TARDIS and she and her friends are floating through space unprotected! How many more episodes until we find the TARDIS? And why didn’t we get opening title sequence? Are they delaying the reveal of the title sequence until we get the new TARDIS reveal? Or will she be stuck on earth driving around a car like the 3rd Doctor was?

The series premieres Sundays at 8/7c on BBC AMERICA. 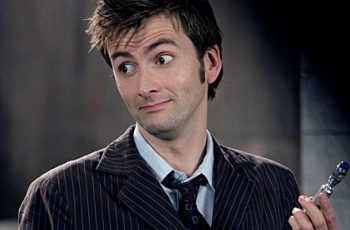 While there’s no such thing as the definitive “best” Doctor, … 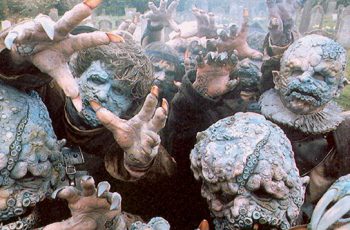