In an interview with Den of Geek, John Carpenter was asked about bringing back They Live and his answer is definitely one to get the rumor mill going. While I absolutely love the original, the themes and message in that film are possibly even more relevant today than they were when it was originally released in the theater.

If you took something like They Live, for example, given how much worse the world and the political landscape have become in the past 25-30 years, how would you refashion that today?

Well, I’m not gonna tell you about that, because it might be closer to reality than you think.

There was a remake in development.

There was a feature film. It was a feature film called Resistance, written by, oh, the guy who did the Apes movies. Matt Reeves. But then he moved on, and so the sequel is, well, we’ll see. We’ll just have to see.

There are also 2 Movie Stars currently who would be perfect to take on the iconic roles originated by Roddy Piper and Keith David.

Who do I think could take on these roles?

I mean is there any real choice other than John Cena and The Rock? MAYBE Vin Diesel?

But he didn’t tease a remake, he specifically said “Sequel”. So, how would that play out? The general public really didn’t know what was going on, so do the aliens come back and try again when they think everyone has forgotten about it or written it off as a conspiracy theory? Are we taking the fight to them somehow?

I’m not sure what I would want from a follow-up to the original, it ended in a way that was a satisfactory end to the story, we won, well, we won that battle at least. 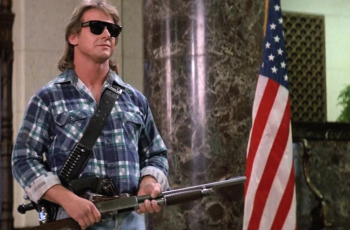 Are you ready to kick ass and chew bubble gum? …