[Warning: the subject and some photos in this article could be considered PG-13.] The story of Star Wars boils down to the battle between good and evil. Even Harrison Ford acknowledged that way back during the filming of The Empire Strikes Back. However, you can’t tell such an overarching story without focusing on the people that exist and relationships that form within that story. There is romance, heartbreak, deceit and deception. There’s something else, too: sexuality. Let’s face it – sex happens even in the galaxy far, far away. But is there a sexual disparity when it comes to Star Wars?

A sultry Leia clad in a sheer gown in ‘Star Wars’. (Image: Disney/Lucasfilm)

George Lucas was a visionary, no doubt. But was he perhaps a little bit of a dirty old man, too? Both the original trilogy and the prequel trilogy are rife with examples of scantily clad women. You don’t even have to look very hard in watching those films to find them. Granted, Star Wars is science-fiction with a huge, male fan base. But one need only peek at these female cosplayers to know that there are plenty, plenty of female Star Wars aficionados out there. So why not throw a bone to the ladies, George?  There’s no question that when it comes to Star Wars sex appeal there is a vast sexual disparity.

Don’t believe me? Let me give you some examples. 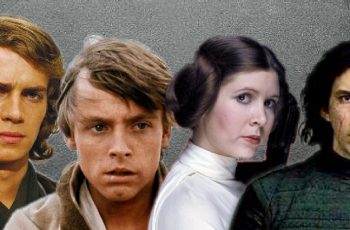 Over the course of forty-plus years and three generations, Star …
It shouldn’t shock anyone that the Star Wars Rebels took …