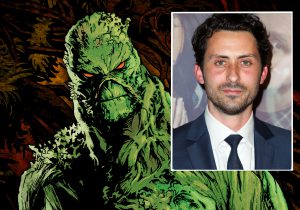 One of the highly anticipated DC Universe original series that will arrive in 2019 is Swamp Thing, from Aquaman director James Wan, which is ramping up to start production soon. As we have been getting casting news for several characters lately, fans have been eagerly waiting to find out who will be playing the man behind the creature, Alec Holland.

“Described as a passionate biologist, Alec Holland becomes caught in the crosshairs of a small town nightmare when he discovers a bizarre local illness may be connected to his work in the swamp. Holland’s discovery leads him into conflict with dark forces, from which he emerges as the elemental hero known as Swamp Thing.”

According to a recent schedule revealed by DC Universe, Swamp Thing will arrive sometime in June 2019, releasing weekly episodes through August. While shows like Titans and Doom Patrol will exist in the same universe, it appears that Swamp Thing will not be existing in that continuity, at least for the time being. When it comes to Stargirl existing in the same realm as Titans and Doom Patrol, Geoff Johns, who is executive producing all three shows, have stated that for now, the Courtney Whitmore series will also stand on its own. However, in an interview with Comic Book Resources, Johns made it clear that it’s not out of the question for a crossover to happen someday.

“For me, Stargirl was its own show with the Justice Society. That doesn’t mean we wouldn’t eventually do something, but the goal is just to make a great Stargirl show right now, and — if it happens to interconnect in the future with other things — great.”

Are you excited for Bean and Mears taking on the roles of Alec Holland and Swamp Thing respectively? Sound off in the comments below and be sure to stay tuned here on That Hashtag Show for everything trending in geek pop culture!