Hello amazing That Hashtag Show readers!  Well, it finally happened.  After thirty plus years of watching wrestling, I’ve decided to start writing about it.  I’m very excited to be recapping NXT each week for you, and to provide you with my opinions on the wonderful world of professional wrestling!

Heavy Machinery vs. The Forgotten Sons

If there is one thing that NXT does better than the main roster, it’s tag teams.  I’ve been noticing as of late that NXT’s motto seems to be, “if they’re broke as a single’s wrestler, let’s fix it with another wrestler.”  This strategy has worked extremely well for the Street Profits, and it’s working just as well now for The Forgotten Sons. I’m very much convinced that Jaxon Ryker does not wrestle anymore.  He’s more of a “sit and look mean” kind of manager, which is fine. Steve Cutler was paying tribute to Kobe Bryant’s facemask during this match and started to turn the match in The Forgotten Sons’ favor with a sweet single-arm DDT.  Am I a sucker for limb work? Why, yes. Yes, I am.

As much as I love Heavy Machinery as a team, my love for Otis Dozovic grows with every match.  Man, that singles match he had with Tommaso Ciampa a couple of weeks back was fantastic. Otis strangely reminds me of Rick Steiner.  Tucker Knight has a decent hot tag that was put over the top with a sweet somersault body press a la Mick Foley from the top rope.

The end of the match saw Heavy Machinery attempting to go for their so-so finisher, The Compactor on Cutler but Knight got pulled out over the top rope.  He recovered quickly, however, to push Cutler off the top rope onto Ryker. Otis Dozovic gets the pin with a sick pop-up front slam.

We get a little video recap of last week’s altercation between Candice LaRae and Nikki Cross, followed by a very familiar voice asking Candice about Johnny Gargano as she makes her way to the arena.  She says she’s here to ask William Regal for a match with Nikki Cross.

Speaking of old Johnny Wrestling, he sent us a video!  (But we’ll get to that a little later.)

Cathy Kelley is tasked with interviewing NXT Women’s Champion, Shayna Bazsler.  But William Regal interrupts the interview to inform Bazsler that she will face Kairi Sane in a rematch at NXT TakeOver: War Games II in a two-out-of-three falls match.  Personally this feels a little over done but I can suspect that (possibly) this will be their final encounter and we’ll move on.

Conti has a belt that she takes off to reveal basically the same belt.  All jokes aside, Conti has only been wrestling for about two years now. While she’s still very new in the ring, she’s got a ton of potential.  That bicycle kick to Kai was pretty brutal. It’s great to see Dakota on television more and more each week. She’s been fantastic for years now, and it’s great to see her finally getting some recognition.

Lots and lots of kicks in this match.  This is not a complaint. Dakota gets the pinfall victory with the extremely innovative flip back cracker, the Kairopractor.

In keeping with NXT’s women’s division, Mia Yim is interviewed backstage.  Bianca Belair has a problem with this. SPOILER: We will see that match next week.

After the break, we get a recap of Matt Riddle’s NXT debut.  Followed up by Riddle and Keith Lee walking backstage talking about Riddle’s debut.  They come across Kassius Ohno, who would like to break Regal’s new toys. After Ohno walks away, Riddle and Lee shrug it off and continue their celebration. Seeing the EVOLVE alumni walking down the hallway and being pals brought a big smile to my face, and hopefully these two form a team for the next Dusty Rhodes Tag Team Classic.

We get a recap last year’s War Games match sprinkled in with some new interviews from both The Undisputed Era and the War Raiders, Pete Dunne, and Ricochet.  If there’s one thing that NXT/WWE knows how to do it’s hype a match with an amazing video package. I’m glad we’re back to a two team format for War Games and I couldn’t be more happy that I get to see this event live.

And now to get back to that video message from Johnny Gargano… He says he’ll be very honest with us.  Johnny says that Aleister Black is very much like the Arnold Schwarzenegger film, Collateral Damage and that he got in the way of his path to defeating Tommaso Ciampa.  Johnny goes on to tell us he’s the hero of this story, not the bad guy.  Johnny says he’s not afraid of the dark anymore and that he’s starting to like it there.  Longtime Gargano fans know of his work as a heel, mainly in CHIKARA with F.I.S.T. Honestly, I’m not sure if this is where I would have liked Johnny Wrestling to go, but I’m interested to see where this takes him.  I’m sure it will lead to another Ciampa/Gargano match in an already incredible series.

William Regal is standing by backstage.  Next week, whomever wins the singles match between members of both War Games teams will get the advantage for their team at said event.

Alright, look.  I know Velveteen Dream doesn’t have a chance at winning the NXT Championship at TakeOver.  But man, he sure as hell is ready for a championship run. This dude is only twenty-three years old and he’s already this good.

On the other hand we have Lars Sullivan who could have the most perfect entrance in NXT.  It is so well produced and does a fantastic job of making him look like the monster they want him to be.  Dream comes out of the gate super aggressive, and he’s stopped dead in his tracks as Lars tosses him onto the hardest part of the ring.  Lars has his way with Velveteen, just throwing him about and using his immense strength to his advantage.  Velveteen Dream takes a sickening bump over the top rope in this match. I went back and watched it a couple of times and- yikes.

Dream starts to mount a comeback and hits a huge missile dropkick on Sullivan.  Lars gains a momentary advantage, but it’s lost after he misses a top rope headbutt.  Dream hits the Dream Valley Driver and goes to the top for the Purple Rainmaker. Ciampa makes his way to ringside for a distraction and Lars Sullivan picks up a huge win after hitting the Freak Accident on Dream.

After the bell, Ciampa taunts Dream and hits him with the belt.  Ciampa goes to hit Dream with the double underhook facebuster onto the NXT Championship, but Dream reverses it into a superkick followed up by a DDT onto the championship.  Every referee in the back comes out to stop Dream from hitting Ciampa with the Purple Rainmaker. He fakes leaving, but then comes back and hits Ciampa with it anyway. Show ends with Dream holding up the NXT Championship.  A cool moment, but feels like this came one week too early, as next week is the “go home” show.

All in all another fun week of NXT.  See you all here next week! 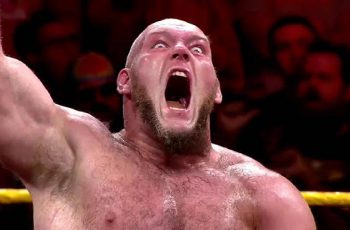 WWE has released a new teaser for NXT’s Lars Sullivan. … 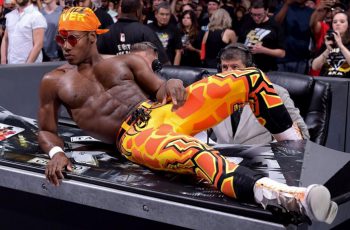 It has been announced NXT superstars are being called-up to …