The BBC aired the latest episode of Jodie Whittaker’s Doctor Who “The Tsuranga Conundrum,” written by new showrunner Chris Chibnall.  In it, Chibnall directly contradicts a choice made by previous showrunner Steven Moffat.

One of the greatest things Doctor Who brought to science-fiction is the idea of Regeneration.  A beloved character can suddenly transform into someone completely new with a different face, body, and mind.  A lovable light-hearted person can turn into a sharp-tongued cynic.  The cautious thinker can become the daring rogue.

Jodie Whittaker’s Doctor has been openly friendly to new people but also reserved about her own identity.  In the first episode of the series, she faces off against the alien hunter T’zim-Sha and states, “Leave now or we’re going to stop you.”  Conversely, in Matt Smith’s first episode as the Doctor, he says, “Hello, I’m The Doctor. Basically, run.”  The mere mention of the Doctor’s name has caused alien invaders to turn back.

His fame across the universe became such a big problem for Matt Smith’s Doctor, that galactic armies were formed to stop him.  In “The Wedding of River Song,” he remedies this by faking his own death and erasing himself from the historical records.  He said, “I got too big.  Too noisy.  Time to step back into the shadows.”  Throughout the remainder of Steven Moffat’s era, that more or less remained true.

In “The Tsuranga Conundrum” we see a new side (or maybe, old side) of Jodie Whittaker’s Doctor.  She recognizes General Eve Cicero as someone from the Book of Celebrants.  The general in return mentions that the Doctor has an entire chapter in the Book.  While she first denies the connection, the Doctor does correct the general later saying, “I’d say it was more of a volume, then a chapter. Just so you know.”

The Eleventh Doctor would not have missed removing himself from the Book of Celebrants.  Even if his later incarnations became famous again, the Eleventh, as a time traveler, would have erased it.  Like so many things in Who that involve cause and effect, this change will have to be explained by “wibbly, wobbly, timey, wimey.” Or if you’re a fan of The Good Place, “Jeremy Bearimy.”

Chibnall has already broken new ground on the series by looking directly at human racism in “Rosa” and not relying on the nostalgia of previous aliens and locations.  Now, he is undoing Steven Moffat’s ban on fame.  Will the Doctor once again become a legend in the universe?  Or was this just a blip in continuity?  And while she honestly admitted she was wrong in “The Tsuranga Conundrum,” will the Doctor fall back into bad habits and let her ego get away from her?

“Welcome to what I presume is your first alien planet. … 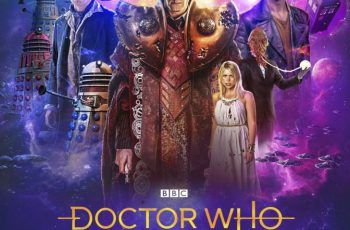 The BBC and Doctor Who aren’t messing around during this …