Power Rangers started back in 1993, but there was a chance of it actually starting in the 80’s.

Everyone knows Stan Lee was one of the co-creators of Marvel Comics, but he was originally planning on bringing a Super Sentai series to the US. The Sentai he wanted to adapt was Taiyou Sentai Sun Vulcan. Now there is a newspaper article back from 1982, which you can see an image of below: 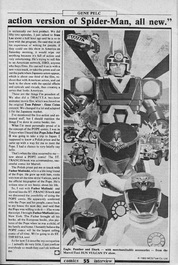 This is because Marvel produced both this Sentai series and Denshi Sentai Denziman. After Marvel had helped to produce Sun Vulcan, Stan Lee wanted to bring the show to America and adapt for an American audience.

Much like how the show is now, he wanted to take the Sentai clips and mix them with American-filmed footage. Along with that, he was planning on using American actors for the main characters. Now he did go a lot of American TV Networks including HBO, but the show was never mad. And in 1993, we ended up getting the start of the Power Rangers franchise.