Disney and Lucasfilm have slowly but surely been bringing various aspects of the old Expanded Universe (‘Legends”, now) back into Star Wars canon. First, Thrawn reappeared in Star Wars Rebels. Then we had the Hammerhead Corvettes of Knights of the Old Republic appear in Rogue One. While these are obvious examples, there is evidence of a more subtle buildup towards another, legendary EU character returning as well. Could we see Darth Revan, or signs pointing to him, in Star Wars Episode IX?

Darth Revan was one of the most popular characters of the old EU. He featured prominently in the Knights of the Old Republic video game, you might recall. A Jedi, fed up with the ways of the Order, he led the Republic Army in the Mandalorian Wars. Eventually, fully swayed to the Dark Side, he became a Sith Lord and his legend was born. It’s that legend that may very well tie him to Kylo Ren, and perhaps Episode IX.

Fans immediately thought of Darth Revan when Lucasfilm revealed Kylo Ren’s first image. There’s no question that his mask bears much more resemblance to Revan’s than it does Vader’s. There are a lot of other similarities too, as Screen Rant notes. Ren, like Revan, began as part of the (new) Jedi Order. Like Anakin Skywalker, he abandoned that order in favor of the power and glory of the Dark Side. Unlike his grandfather, however, Ren followed in Darth Revan’s footsteps by retreating to the Unknown Regions and returning with an army of his own. Further, like Revan, Ren brought other Jedi converts with him, this time to form of the Knights of Ren.

Kanan, Ezra and Ahsoka visit the site of the Scourge of Malachor in ‘Star Wars Rebels’. (Image: Disney)

There are many other ties to the time of Darth Revan throughout Star Wars canon, as well. Notably, in Rebels, Kane, Ezra and Ahsoka venture to Malachor. There a scourge took place during the Mandalorian Wars, the very war that led to Revan’s rise. This direct reference might not have meant anything in and of itself, but….

Revan Reference in The Last Jedi

There is an even more direct reference to Darth Revan in The Last Jedi, hanging in Luke’s hut. Luke possessed a pendant with a red kyber crystal. Original theories opined that Luke took the crystal from his father’s lightsaber. That theory fails, though. Like Luke’s lightsaber in Cloud City, Vader’s plummeted away down a chasm on the Death Star. The Last Jedi: The Visual Dictionary, to the contrary, makes a direct tie between the pendant and Revan.

With so many parallels between Revan and Ren, and other canon references to Revan and the era in which he existed, it seems there’s been a slow buildup to bringing Darth Revan fully into the Star Wars spotlight. What do you think? Will we see Revan, perhaps via a Sith ghost or other means, in Episode IX? 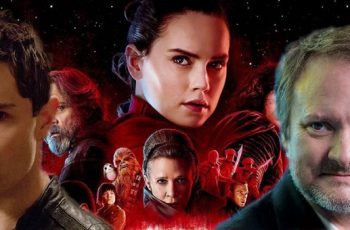 It takes a great deal of acting talent to bring …