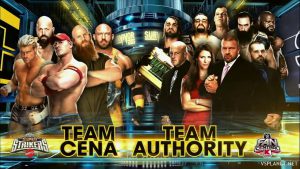 Man.  This match was amazing for at least a couple of different reasons..  At this point we had all tired of Triple H, Stephanie McMahon, and the rest of The Authority.  It had gotten horrible stale story line wise, and it was up to Super Cena to save us. It had the typical “protect this guy” spot (Rusev’s elimination), followed by the shocking moment (well, not so shocking because it was a Big Show heel turn).

Then we saw what was, in my opinion, one of Dolph Ziggler’s biggest moments of his career.  Down three-to-one, Ziggler was kicking out of anything and everything. Even when you thought he was done.  It eventually came down to Ziggler and Rollins, with Triple H interfering at every twist and turn. Sting making his WWE debut by confronting Triple H, and thus helping Ziggler get the win was a fantastic finish. 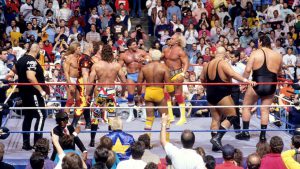 I just recently watched this match again, and it still holds up.  This match was a whole lot of fun, just from a nostalgic standpoint alone.  While Hogan’s team was somehow out sized, that didn’t keep them from beating the ever-loving crap out of “Ravishing” Rick Rude for most of the time he was in there.  Let me tell you, I don’t think I’ll ever get over the reaction a hot tag to Hulk Hogan got in the 80’s. Explosive. Hogan was eventually eliminated by count out, which left Bam Bam Bigelow to fend for himself in a three-on-one situation (much like the previous match I just wrote about).

I’m not completely sure I realized how over Bam Bam Bigelow was in the late 80’s.  Try as he might, he had to face Andre who made quick work of him. Andre’s soul survivor celebration was cut off shortly by Hogan just hitting him repeatedly with the WWF Heavyweight Championship followed by Hogan posing to close out the show.