When I left The Hi-Hat this past Friday night, I walked to my car in a haze. I feel like most would have done the same if they had witnessed the main event for GCW Presents Joey Janela’s LA Confidential: Nick Gage vs. David Arquette.

But let’s back up a little bit here. If you aren’t familiar with Game Changer Wrestling’s Joey Janela events (Spring Break I, Spring Break II, and Lost In New York) all you really need to know is that they are completely bonkers. Completely bonkers and so much fun. Matches you couldn’t even dream up of see the light of day, and they live up to the hype.

When Joey Janela started announcing the matches we would see for GCW’s debut on the West Coast, it was very exciting. Then he announced the main event: Joey Ryan vs. Nick Gage. I personally was very excited for this match to happen, mainly because I felt we’d see a different side of Joey that we hadn’t seen in a while (Any PWG Guerrilla Warfare match he’d be in, for example). Unfortunately, Joey torn his pectoral muscle and he needs to have surgery to repair it.

This left a spot open for the main event, and Joey Janela did what he does best: Gave us a WTF booking.

So the match was on, Nick Gage vs. David Arquette. I didn’t know what to expect. I know Arquette had been training and I’ve seen clips of his match from Championship Wrestling From Hollywood, but this is Nick f’n Gage. I’m sure most of you have seen the clips of this match. While they do the match justice, I was there live in the crowd. Let me tell you, it was the craziest thing I’ve seen in a wrestling ring. I’d never been to a match where light tubes were involved, and not just like two or three light tubes: dozen upon dozens of them. Things went South from there. Arquette was bleeding all over the place, and he ended up getting a really bad cut on his neck. I assume he went into “fight or flight” mode, because he left the ring at one point and was holding the side of his neck to try to stop the bleeding.

He then decided to get back into the ring, and decided he was going to try to shoot on Nick Gage. Gage seemed to figure this out pretty quickly, and quickly pinned Arquette for the victory. Gage grabbed the microphone after the match, and I cannot remember exactly what he said but this prompted David Arquette to come back out and yell, “I didn’t need to beat you, I just wanted your respect.”

He was then driven to a nearby hospital, stitched up, and was apparently backstage at Survivor Series. He issued this statement over the weekend: 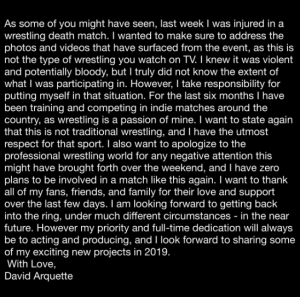 The main reason I got injured was because of my lack of experience – don’t try this at home pic.twitter.com/icQK2wnQNc

Arquette seems like a good dude, who loves the sport of professional wrestling. Do I think he got in over his head? Yes, absolutely. However, I don’t think we can put blame on GCW for booking this match. We can’t put blame on anyone, really. It was a match that got out of hand, and thankfully it didn’t end in any life changing injuries.

If you really want to check out this match (and if you’re fine with blood) you can check out the replay over at FITE.TV. It’s only $14, and is well worth it. There were some other fun matches on there as well(Hardcore Holly vs. Brody King, which featured the loudest chop I’ve ever heard)