Beyond each of their wishes is where the “Apocrypha” is woven.

Aniplex of America announced their plans to release Fate/Apocrypha as two Blu-ray box sets. Based on a light novel series by Yuichiro Higashide, who is also an FGO Scenario writer, with original illustrations by Ototsugu Konoe, Fate/Apocrypha is part of TYPE-MOON’s expansive Fate franchise which include popular anime series Fate/stay night [Unlimited Blade Works], Fate/Zero, and the mobile game Fate/Grand Order. Produced by A-1 Pictures, the series is directed by Yoshiyuki Asai, who served as series director for Charlotte, and character design by Yukei Yamada (Puella Magi Madoka Magica The Movie –Rebellion–, IDOLM@STER Cinderella Girls) with music by renowned composter Masaru Yokoyama from Your Lie in April. Each Blu-ray release will include an original soundtrack, booklet, and a rigid box illustrated by original character designer Ototsugu Konoe. Blu-ray Box Set I will be available November 20th with the Box Set II release scheduled for February 12, 2019

At the center of the series is a conflict between two factions, Red and Black, in the largest Servant battle known as the Great Holy Grail War. Although this is a Fate spin-off series, as the title connotes (“Apocrypha”), the story, involving 14 Servants and a Ruler, has its own brilliance and great drama. The director hopes that Fate/Apocrypha will not only be enjoyed by existing hardcore fans of the Fate series, but that it can be the catalyst for new fans as well as players of the mobile game Fate/Grand Order. Additionally, Fate/Apocrypha features a variety of voice actors that are at the top of every fan’s wish list, including Maaya Sakamoto (the Garden of sinners, Black Butler), Miyuki Sawashiro (Durarara!! Series, Sword Art Online II) and many others.

Fate/Apocrypha has received rave reviews for its heart racing action fight scenes, including episode 22’s battle between Saber of Black and Lancer of Red drawing praise from both Yana Toboso, the creator of Black Butler, and creator of the Fate series, Kinoko Nasu, who wrote on his official blog that “it can only be described as a masterpiece” after attending a private screening for the episode. The series was also awarded the Monthly Newtype Magazine’s 2016 – 2017 Anime Awards for Best Screenplay and Best Work (TV).

“I chose to fight. From that instant, my hands were covered in blood.”

Taking place in Trifas, Romania, the Great Holy Grail War that takes place between 14 Heroic Spirits summoned by the two factions transforms thanks to Shirou Kotomine, one of the Masters of the Red who is also the Overseer for this Great War.

Sieg — an unknown boy, who picks up the sword for the sake of his own wishes after harboring the power of the “Dragonslayer” within him. 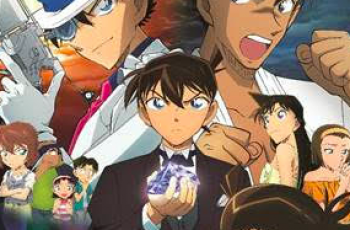 TMS Entertainment will premiere the popular Detective Conan (aka Case …
This fall, RWBY fans will have the exclusive opportunity to …