The Fourth Doctor himself, Tom Baker, has been producing new Doctor Who content for years.  Including filming inserts for the unfinished Doctor Who episode Shada and resprising the role of the Doctor in Big Finish audio adventures.  He has also narrated Doctor Who talking books for BBC Audio.

Baker’s latest project is Scratchman, a Doctor Who novel based on an idea by him and Ian Marter (Doctor Who’s Harry Sullivan).  The two had originally conceived it as a big screen adaptation.  Baker and Marter would reprise their roles as the Doctor and Harry. And Who co-star Elisabeth Sladen would return as fan-favorite character Sarah Jane Smith.

While Baker and Marter were enthusiastic about the project, they were unable to get funding. So, the idea for the film was abandoned.  It would have ended there if for not for a copy of the script being rediscovered in 2006.  Former Doctor Who producer John Nathan Turner had donated a copy to the British Film Institute before he died in 2002.  The script has been adapted by James Goss.  He previously adapted Fourth Doctor adventures, written by Douglas Adams, for BBC Books.

Scratchman will also be released as an audiobook by BBC Audio on January 24, 2019, the same day the novelization releases.  It will be narrated by Tom Baker.  Speaking about Scratchman, Baker said, “I love the improbability of Doctor Who. Reason plays no part at all. As in religion, the overriding thing is faith. It may be improbable, but just believe in it and it’ll all come right.”  He continued, “When I was approached about the book, I thought, ‘Why not?’ I’m always on the lookout for a novelty. I’m very enthusiastic as I get close to darkness.”

“What are you afraid of?”

The Doctor, Harry, and Sarah Jane Smith arrive at a remote Scottish island, when their holiday is cut short by the appearance of strange creatures – hideous scarecrows, preying on the local population. The islanders are living in fear, and the Doctor vows to save them all. But it doesn’t go to plan – the time travellers have fallen into a trap, and Scratchman is coming for them.

With the fate of the universe hanging in the balance, the Doctor must battle an ancient force from another dimension, one who claims to be the Devil.

Scratchman wants to know what the Doctor is most afraid of. And the Doctor’s worst nightmares are coming out to play…

A story so epic it was originally intended for the big screen, Scratchman is a gripping, white-knuckle thriller almost forty years in the making. 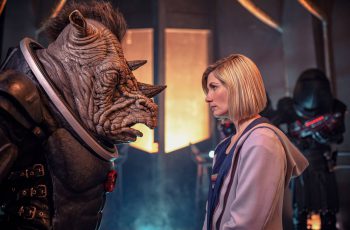 Whovians got their first look at Season 12 of Doctor …