Before diving into the actual issue, take a moment to truly appreciate the cover.  It is hard to remember with all the Titans we have had, how many of the originals we have actually lost.  This cover really drives this home, and shows what Donna is feeling.

Titans #30 picks up right where the last one left off.  Beast Boy has gone feral.  Miss M. has been so weakened by stress and injury that she has reverted to her white martian form.  The rest of the team looks on, lost and confused.

Garth and M’Gann go WWE on each other, and when the others step in, they are tossed aside like rag dolls.  Not until M’Gann breaks through Garth’s feralness with her telepathy that she is able to get through to him.  M’Gann begins what becomes the focal point of this issue – soul bearing.  M’Gann breaks through because she confesses her secrets to Garth.  How she hated having to hide what she was.  She wished to be liked by the team, but that meant hiding her white martian side.

M’Gann then has to deal with the trust she broke with the rest of the team by hiding what she was.  The team was supportive though.  Even when Beast Boy tries to apologize for losing control, the team doesn’t blame him.

What happens next is intriguing.  Raven sees her spirit self chained in a dungeon crying to be set free from a castle surrounded by rivers of lava.  Is this her demon father’s palace?  We will have to find out more when Raven wakes up from passing  out.

Meanwhile, Donna and Natasha talk about what i talked about last review.  How much more can this team take before it falls apart?  Their leader is gone and everyone is being hurt by something either physical or mental.  In fact they mope around the campfire ab out this very thing.

This is where I really love this issue.  Donna finally does what no one else can do.  First she recognizes the reality of their situation.  They are all lost and all hurting, but then she comes forth with the secret that has been haunting her and getting in the way.  She tells the group of Roy’s death.

With all their secrets out of the way – It’s Morphing Time!  Well kind of.  For those that saw last year’s Power Rangers movie, this is exactly what the team had to go through before they could come together and finally morph.  I love this scene because it’s what i have been waiting for.  Donna says enough.  She finally steps up to be the leader and promises to unite the team and lead it going in the right direction.  While the team doesn’t exactly Morph, they do come together.  Team Titan returns!

Steel gets the rescue beacon working once more, and who should return to save them but Guy Gardner.  I really love some of the covers that are being done across the DC Universe, but i do not like the habitual pattern that is emerging.  The cover looks great, but it has nothing to do with the actual issue until the final panel.  Thus being spoilers.

What i really like about this issue is the feel of hitting rock bottom.  Team Titan is finally ready to pull it all together and be a team for the first time.  Does that mean Nightwing is gone for good?  With the direction of his comic it is possible.  We shall see. 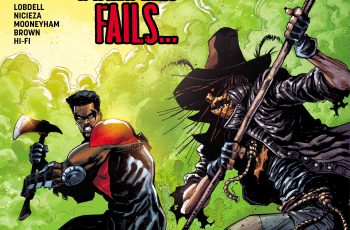 Starting with the covers, I love both of these covers.  … 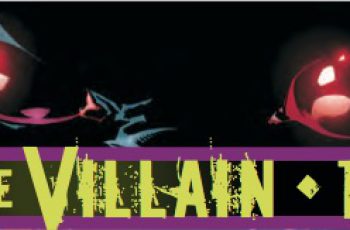 DC comics… Year of the Villain! Eagle eyed fans, or …