Heroes In Crisis has a lot of tumblers in motion at the moment.  Sanctuary lies in ruins.  Booster Gold just got clocked by Flash going Mach 1.  Harley slipped out from under the fingers of the Trinity.  Lois just received a care package from The Puddlers that will either shed light on what happened or point the light in the wrong direction.  However, in this issue we take a step back to explore Sanctuary and life there. 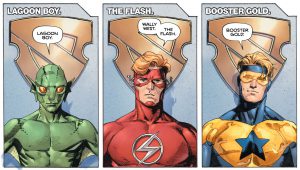 Through the Eyes of Heroes

Through the eyes of Lagoon Boy, Flash (Wally West), and of course Booster Gold, we see how Sanctuary operates, some of the rules and even how it tries to cure those that come seeking help.

Secrecy is paramount.  Patients are encouraged to wear generic robes and golden masks; However should someone feel comfortable enough, they can walk around as is.  They can be in a commons area with others, or they can retreat to their own private rooms.  Even the caretakers are robots programmed for such secrecy.  Those at Sanctuary are meant to not only feel safe but truly be safe.

Through the three patients we also see how therapy works.  Patients go into a psycho-kinetic “chamber” that takes the patient anywhere they need to go to confront their problems.  Think of it as a holodeck that can reach into the patients mind.  Wally sees his family.  Booster sees and talks to, well…. himself. 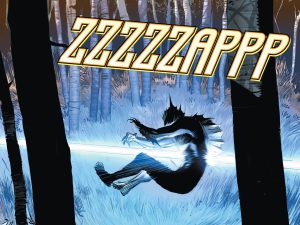 Lagoon Boy’s story wrenches the heart the most.  He relives being shot by a laser to the chest not only several times but 337 times.  Lagoon Boy feels the attack that crippled him and killed/wounded his Titan team.  He cannot escape that day, reliving it internally every day until he finds being shot every day in the chamber is some sort of improvement.

He makes a comment that i will not repeat here as it applies directly to the end panels.  If you have not read this issue yet, you really need to read it to appreciate it.

Did We See What We Think We Saw?

I am going to skip some of the story and jump to the end.  At the point of the story where things start to spin out of control we join up with Booster as he wanders the farm, having only been at Sanctuary a day.  Bodies litter the ground.  He runs into Harley on the front porch after she just cold-cocked Wally in the head with her hammer, presumably killing him.

Harley is typical Harley, acting as if nothing out of the ordinary happened.  Issue #1 would presumably pick up here or shortly after. Given what we know, i am not entirely convinced things are as they appear to be.  That would be too simple and straight forward.  Watch for the misdirection.

What an incredible issue!  How it deals with each of these characters as they go through treatment is truly moving.  Even Superheroes are human on the inside.  Even Superheroes can break.  Again it leaves clues and miscues as to what happened and where the attention needs to be focused.  I can’t wait to see where we go with issue #4!