The final season of Tom Baker’s Doctor will be coming to Blu-ray on February 25, 2019*.  Season Eighteen of the original run of Doctor Who is part of BBC Studios ‘classic’ box sets.  The set will also include the 1981 pilot episode of K-9 and Company.

Season Eighteen contained seven stories: ‘The Leisure Hive,’ ‘Meglos,’ ‘Full Circle,’ ‘State of Decay,’ ‘Warriors’ Gate,’ ‘The Keeper of Traken,’ and ‘Logopolis.’  In Logopolis, Tom Baker’s Fourth Doctor regenerated into Peter Davison’s Fifth Doctor.  The episodes have been remastered by Peter Crocker and Mark Ayres, who also remastered Doctor Who Season Nineteen.  The packaging/artwork is designed by Lee Bindin, who has done multiple promotional pieces for Doctor Who.

Besides the remastered high-definition upscaled epsides, the box set has a bunch of new features: 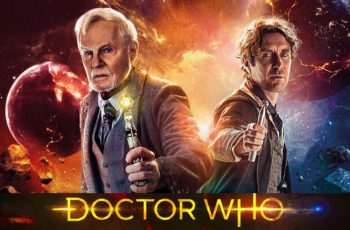 THE MASTER VS THE DOCTOR Fans of Doctor Who, Derek …