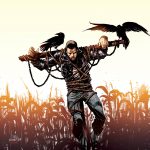 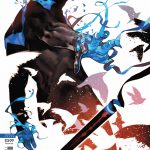 I love the covers to this issue.  The A-cover is a great representation of what is happening in this issue.  Scarecrow has ‘Ric’ wrapped around his finger for purposes that Ric cannot see, but i will come back to that.  Having Ric tied to the Scarecrow cross with crows on him is a great representation of everything that is happening.  The B-cover is also an awesome representation of what is going on with the superhero we know as Nightwing.  Not only is it a beautiful cover in and of itself, but it expertly depicts the facts that Dick/Nightwing we all know and love is unraveling fast!  If it weren’t for comic formula cliches, i would be worried that we are witnessing the end of Nightwing.

So what happens in this issue?  Not a whole lot, action-wise, but mentally this is a creepy and defining issue in Nightwing’s story.  First off, Team Nightwing is on its feet!  Several Emergency Response personnel have assumed the mantle of Nightwing, each using different versions of Nightwing’s costumes.  They are busting crime on the streets once more, and when their presence is captured by a police chopper, they are cheered.  The good people of Bludhaven have missed their hero.

One issue that pops up is the moral dilemma of the vigilante.  Team Nightwing succeeds in busting a crook with a whole lotta cash on him.  Malcom wouldn’t mind keeping some of the cash to help out, but Sap is too by-the-rules.  The choices of those working outside the law.

The other half of the story focuses on a therapy session or two between Ric and his therapist, Dr Gruidae (aka-Scarecrow).  This is by far the most fascinating and intriguing part of this issue.

Ric talks about how he has no attachment to his past.  He can do all these amazing things.  He knows 12 languages.  He knows he used to be the vigilante known as Nightwing, but he has no attachment to it.  Ric neither misses nor wants to reclaim his former life.  He has no fear.  In fact he gets a clean bill proof health and then heads home, only to get lucky with his favorite bar girl.  What could be wrong with that?

Maybe that Ric’s inspired speech and revelation of being without fear just fed into the Scarecrow’s brain.  Scarecrow confesses to his Nightwing Funko Pop that he feels reinvigorated and ready to help cure the entire city of its fears.  Normally that sounds helpful, but in the hands of Scarecrow you know blood and death lay ahead. 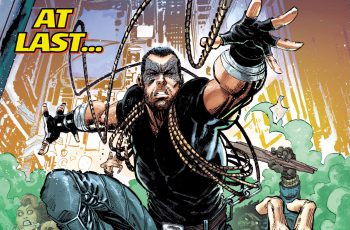 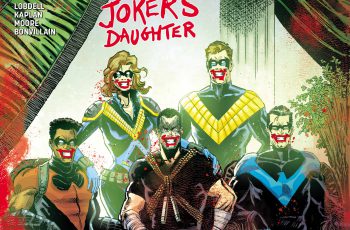 Nightwing #58 is an interesting issue as it seems every …