Marvel released the latest incredible trailer for Captain Marvel on December 3rd, following it up with a lifting of the embargo on recent interviews with star Brie Larson. You can check out some of the highlights below, along with a new behind-the-scenes photo of Larson and her costar Samuel L. Jackson, before checking out the full transcript on Collider.

The MCU has been around for ten years and spanned twice as many movies, yet Captain Marvel is the first female-led film of the franchise – something Larson knows is both an honor for her and an indictment of a system that has yet to reach equilibrium. She spoke about the conflicted emotions with fervor when questioned:

Larson and Jackson having fun on set.

I don’t know. I don’t know how it’s any different. To be honest, I don’t want it to feel different. Kind of over the first female blah, blah, blah. And like, ‘Wow, maybe women can actually do the same things that dudes can do. Like, what a crazy concept!’ You know what I mean? I feel like the more we talk about it, the more we perpetuate the myth that it’s an impossible task. It’s like, no. If it wasn’t like that before it’s because it was wrong. That was just wrong. Now we’re just doing what’s natural.

As much as women in charge should be just as much the norm as men, that has not been the case thus far. It’s a good thing that Marvel has finally stepped up to the plate, but as Larson herself pointed out, the fact that they hadn’t before is what’s noteworthy. She delved into the duality a little further when pushing back against the notion that women should get specific messages out of this or any film.

You know, it doesn’t matter what I make; I feel really firmly that art is made to be enjoyed and interpreted, and you get what you need out of it. My favorite books I’ve read multiple times in my life and they mean something totally different to me every time I read them. Art isn’t made to be processed and labeled and organized in the way that we do it now. I even have a hard time with the idea of a genre and that we place value based off of, ‘Well, it’s really good for a this kind of movie.’ It’s like, ‘Huh? What does that even mean? I don’t understand.’ It’ll be what it is, and I think there’s gonna be a lot there for people to digest and feel. And hopefully it’ll be the movie that you want to revisit again and again, and as life goes on it’ll have more to it. I just want to make art that lasts. I want to make art that you grow with. That’s all.

There’s no question that Captain Marvel will be a movie that audiences – whether male, female or nonbinary – will be talking about for a long time. Whether that’s because of the performances, action sequences, or the message itself is up to the individual viewer. But one thing many fans are looking forward to is the way Carol will interact with other MCU characters, and Larson did provide a few hints about the dynamics between Carol and newcomer Maria Rambeau (played by Lashana Lynch).

I think the Maria dynamic is really important in this movie. She’s the representation of love in this film, and it is something that I’m very proud of, that the love relationship, and it is a deep love relationship, is not by the same lustful definition that we usually attribute to movies of this size, that it’s more complex, and also I think more meaningful than most love relationships that I see in films like this. Maria as a character is an incredible badass in her own way. And they are equals. I think seeing two women that have a playful competitiveness while also mutual respect and care, and have got through so much together, there’s a lot of history, and are just best friends is something that I’m excited to see, because uncomplicated female friendships are sort of rare to see. I have a lot of them in my life, so to be able to bring that on screen with someone, with Lashana [Lynch] who’s just so crazy talented and smart and beautiful and wonderful, and is doing her own part to make sure that there are revolutions in the movie that are her own that she’s creating is just awesome.

Between a surprisingly complex onscreen female relationship and the news that Captain Marvel writer Kelly Sue DeConnick consulted on the film, we at That Hashtag Show are more excited than ever before. But how are you guys feeling about the upcoming Marvel movie? Let us know in the comments below!

Marvel Studios has finally delivered the first full trailer for … 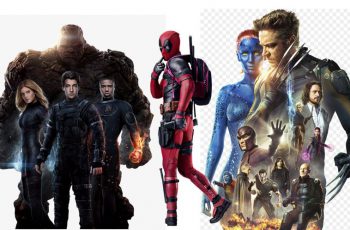 Fox originally wanted to create their own MCU with its …