HERE WE GO!  We all knew it was coming, but they have officially labeled this comic for the run up to issue #1000.  You have to assume they will have an issue like that be very important to the story and character, and with this being the first issue leading to it, Issue #994 does not disappoint!

This is one incredible issue from start to finish, and does an amazing job launching us on the road to 1,000.  We need go no further than the covers or epicness of this issue.  Cover A has something to do with straining against the presence of his parents as they try to drag or weigh him down.  If that doesn’t strike to the very heart of this mythos, I do not know what does.

Cover B, meanwhile, is a much more graphic representation of the same thing.  A boy sits in a pool of his parents’ blood as their bodies lay murdered in front of him.  The boy’s hands held out in front of him in helplessness.  Only then does the figure of the resolute Batman reflect back at us in the pool of blood.  Damn.  And this is just the covers!

Then we have the TITLE PAGE!  We get an excellent little blurb describing how the events of his parents’ murder would set up all that he was to become.  Then the title page blazes to life!  What a poster this would make of the Batman swinging into action with the Bat-symbol blazing in the background.  The chapter title Mythology does a wonderful job setting up where we are headed over the next few issues, and especially where this one starts.

Mimics of the Past

This issue does an amazing job catching both sides of Batman.  It starts with him in full detective mode as he and Commissioner Gordon investigate a grizzly crime scene.  A couple has been drowned to death in the Gotham Aquarium. The couple – Thomas and Martha Wayne?!  Of course, it is not the actual parents of Batman, but the dress, plastic surgery, murder wounds… Everything was an exact match and perfectly replication of the night they were killed.

I love when a diver says he will have the bodies out in just a moment, but instead flicks a small device onto the glass.  When Gordon asks what it is, Batman’s simple response – “A time saver”.  The device blows the tank glass, sending water rushing out and depositing the bodies at their feet.

Batman’s detective senses show him the clues to say this couple was not drowned in the tank.  They were murdered beforehand.  Also, Batman finds a pearl in the mouth of each corpse.  A perfect replica of the pearls Martha was wearing on the night she died.

Someone had gone to excruciating lengths to commit this murder in every possible exact detail as the night the Waynes were murdered, including doing it on the anniversary of their deaths.

We then jump to Dr. Leslie Thompkins, a known associate of Batman and the Waynes.  She is leaving her clinic for the night, notices the bat-signal, and then notices the giant, four-armed, muscular abomination that is holding it high above its head!  Whatever this thing is, it is super strong, impervious to the cops’ bullets and is focused on Dr Thompkin.

Leslie quickly calls Batman and gets him charging to the rescue.  Too little, too late, Leslie realizes the thing was never after her.  It was a trap for Batman all along.  The road to the grave is paved with good intentions.  Dr Thompkin jumps the creature and stabs it in the back of the neck (good choice), but of course all that does is piss the creature off.  The creature grabs her, breathes a gas on her (which of course is never a good thing), and after taking a few punches from Batman, throws her off the roof.

Batman catches her, but when he rolls her over to make sure she is okay……yeah…. Things are definitely NOT okay.  What happened I will let you find out if you haven’t read it because it must be seen to fully appreciate it.  For those of you that have seen it – RIGHT!?

If this is just the start of the run to 1000, they not only kicked it off with the right foot, but they made one hell of an issue all by itself.  It hit on everything great about Batman and it is just getting going.  Can’t wait!

Comic Review Detective Comics #993: The Other Side of the Coin 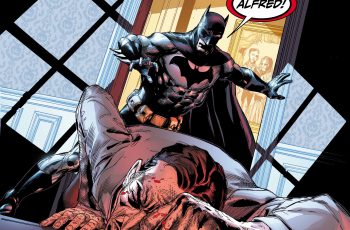 While we have no idea what is happening yet, something …