WHO: Written by: Brian Azzarello

WORTH IT? No, It’s too stiff a price for such a soft story.

Let’s not beat around the bush, the first issue of Batman: Damned was engorged in controversy because a now-censored panel showed us Bruce Wayne’s wang. The new member of the team caused an enlarged reaction among the rigid stiffs at DC standards and practices and the comic was immediately yanked off the shelves. This created quite a pickle for DC’s new Black-Label, as they didn’t want to leave fans flapping in the wind, so they censored Batman’s banana with a flaccid reprint with the Dark Knight’s dong pulled out from the issue.

You can find the uncensored version on Ebay for over $200 and rising. But all this dicking around aside, the story and set-up in the first issue was solid; the Joker has been murdered, Batman might be undead, and someone needs beat out the truth.

This loaded premise should drive the second issue, pushing the story forward through a tight series of action and character arcs. Sadly, this is where writer Brian Azzarello bones it. Instead, of his usual rock-hard character development, we get a flaccid version of Etrigan the Demon as a whacked out, muscle bound, rapper. To hammer home this lame interpretation, his rhymes are weak and almost non-existent. In the first issue, characters were fiddled with in fun and interesting ways, but in this chapter, Azzarello seems to go to great lengths to give classic characters the shaft; Harley Quinn and The Specter are floppy, limp shadows of their former incarnations, spewing incoherent dialogue before wilting into the background.

Maybe I’m being too rough on Batman; Damned, but for DC’s first Black Label print you’d think they wouldn’t be jerking around with filler issues, making each shot count. Bottom line: Issue #2 can’t seem to keep it up when it comes to a coherent story and maintaining a proper pace.

The overall series story is compelling, issue two however… is just a bunch of poppycock.

What am I talking about this time: Walmart’s Superman Giant … 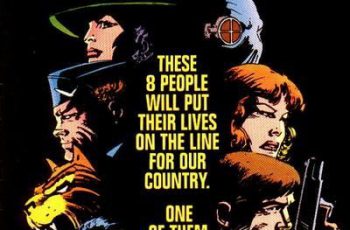 After beginning principal photography in September of 2019, The Suicide …