Movie premieres are things that usually have press yelling a stars name insanely until they turn your way so your camera-man can snap a barrage of pics, out of which one is usually chosen and then published. While it’s definitely exciting for the cast and crew of a new film to celebrate the public unveiling of the culmination of all their what seemed like endless hours of hard work, the press coverage of famous people getting their pictures taken in nice clothes is usually pretty boring. In the eyes of the press, it’s a lot of work for little reward.

Well, Wednesday night’s Aquaman premiere changed all of that, which saw Hawaiian (Samoan) star Jason Momoa and other members of the film’s cast perform a a full on haka dance on the blue carpet. Momoa is no stranger to the dance. He famously performed a haka when auditioning for his role as Khal Drogo on Game Of Thrones, a move which helped his career take off internationally.

Momoa, alongside cast member New Zealand’s Temuera Morrison and family (in this case his 11-year-old daughter, Lola, and 10-year-old son Nakoa-Wolf) began the dance by strutting the full length of the blue carpet in front of fans and press, and shrugging off his necklace and black jacket (showing off his now trademark physique) grabbed his trident, and summoned his fellow dancers to join him and for the next two minutes, he and the others danced the Māori “Ka Mate,” a popular haka performed by New Zealand rugby teams, the All Blacks and Kiwis, before matches.
IT-WAS-EVERYTHING. Instead of a typically boring, stuffy procession of actors and crew posing on their way into the theater, Momoa and the others celebrated the movie’s release with what looks like honest-to-God excitement. So much excitement that Momoa can be seen breaking his Prop-Aquaman-Trident during the performance. Nonetheless, it was just what we needed to see. If you’re interested to know what we here at That Hashtag Show thought of the film read our review by following the supported links.

Comic Rewind: AQUAMAN Vol. 2: The Others

After months and months of waiting, we finally have a … 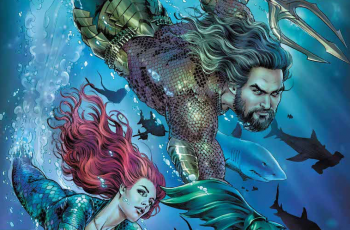 WHAT: DC’s Aquaman #43 WHO: Art by Daniel Henriques, Robson …