Do you love D&D? Have you ever wanted to learn to play D&D? Are you a fan of Rick and Morty? Do you like to laugh? If you answered yes to any of these questions I highly recommend the new series Rick and Morty vs. Dungeons and Dragons. Co-writers Patrick Rothfuss and Jim Zub weave an enthralling tale with main artist Troy Little bringing to life all our favorite characters from both franchises.

In the first two issues, Morty’s school appears to be suddenly taken over by tabletop RPG fans a week before Rick Potion #9. Piquing Morty’s interest he goes to the local hobby store where he gets roped into joining an experienced group in their campaign. How? Why? Because a pretty girl was nice to him and he’s thinking with his dick. Not having anyone else to turn to Morty asks Rick if he knows how to play.

Never have we seen Rick as happy as in this one panel. Quickly we get a Rick Sanchez explanation to D&D. Also, Rick forbids Morty from ever being a bard because, well…bard, and he invites OG’s over to play the OG version. Morty passes the first edition test according to Rick and as second and third editions are covered, no 3.5 however which…whatever, Summer and Beth join the adventure only to get tired of Rick’s OP wizard. Mom, with kids in tow, heads off to enjoy their own pace.  As we finish the second book, Jerry, as only Jerry could, ruins their quest and brings them back into the garage to their dismay.

When Your Adventure Crits a 1

As we join the Sanchez family in the third book Rick is going off on Jerry per usual. Morty uses his adventure punch card to make an executive decision and those that never played the fourth edition are informed they’re lucky. We travel with the family to The Forgotten Realms dimension where quickly an old familiar face takes control and Rick is stripped of his power, then his dignity. Jerry quickly fills in the leadership role and shows just how many lonely hours he’s spent learning the mechanics and roles of D&D.

Finally, after all the new characters are built and we are given their backstories our adventurers set off to explore. Soon a quest presents itself and we see the family bonding and working together like never before. This appears to be the best therapy and family time the Sanchez’s have ever been shown to have as a whole. All that comes to an abrupt and hilarious end as they realize not everything is as it seems.

Pick up issues 1-3 at your local comic book store to follow along whether you’ve never rolled a die or if you’re a level 47 Dwarven Defender like this fan. Here is a short preview of this issue:

DarkCoast and White Wolf Entertainment presents WORLD OF DARKNESS: the Documentary – coming to … 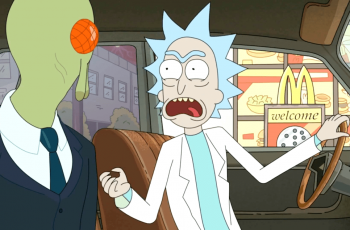 If you are a fan of McDonald’s Szechuan Sauce you …