Jake Gyllenhaal recently discussed his upcoming role in 2019’s Spider-Man: Far From Home and dropped some previously unknown plot details.  While Gyllenhaal is playing the Spider-Man villain Mysterio, the character may not be the movie’s central antagonist.

The Spider-Man: Far From Home trailer premiered at Sony’s Comic Con Experience Brazil panel on December 8, 2018, with Tom Holland and Jake Gyllenhaal.  Fans assumed Gyllenhaal’s Mysterio would be fighting Spider-Man.  However, the trailer revealed Peter Parker and Quentin Beck, aka Mysterio, will be teaming up to fight the Elementals.

“It’s basically just about the kids going on a European vacation,” Gyllenhaal said (via Comic Book Movie). “We go to London, we go to Prague, we go everywhere. It’s just a really fun thing. There’s a lot of dynamics that go on. A lot of relationship stuff. A lot of cool funny stuff. A lot of fun stunt stuff. The main focus is for him not to be Spider-Man per se, but he gets dragged into it. But you know he reluctantly saves the world again with Mysterio. Mysterio’s a good guy in this, they’re both teaming up to kill the game, to defeat these Elemental monsters.”

Photos of Samuel L. Jackson as Nick Fury and Cobie Smulders as Maria Hill on the set of Spider-Man: Far From Home appeared earlier this year.  Fans inferred that Fury would be recruiting Peter Parker in this newest film.  Apparently, Fury will also be recruiting Mysterio.

“Well there are these threats to the world, the Elemental creatures, and Mysterio is someone who knows about them and who wants to make sure that the world is safe from them, and Nick Fury asks him to come on and help because he’s the only one who really understands them in a way. And he teams up with the Friendly Neighborhood Spider-Man and unfortunately he has to make him become more than just a Friendly Neighborhood Spider-Man.”

This is very different from the sequel to Spider-Man: Homecoming fans were expecting.  With the return of the Vulture, played by Michael Keaton, and the comics’ interpretation of Mysterio as a robber, an international robbery spree or spy thriller seemed a likely plot.  But with Gyllenhaal’s comments, the new movie is sounding like a sci-fi adventure of global proportions.  Spider-Man: Far From Home hits theaters July 5, 2019.

A recent set video has released from Spider-Man: Far From … 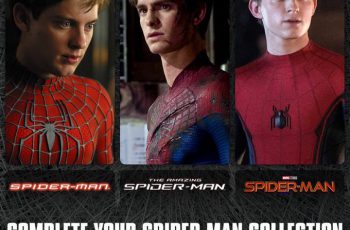 Sony Pictures tweets their audiences a rather…unique name for the …