“It’s time,” is what original Green Ranger, Jason David Frank said in regards to a spin-off show based on the Boom! Studios graphic novel, Soul Of The Dragon, which saw his last adventure as a Ranger. Tommy Oliver’s son, J.J, took over the mantle of the Green Ranger, albeit, the SPD Green Ranger.

Jason David Frank is arguably the most popular Ranger to ever put on a helmet and has graciously returned to the show in the past. He’s pretty much the Wolverine of the Power Rangers franchise and just like Hugh Jackman’s Wolverine, he deserves a fitting ending. What excites us is that with Hasbro acquiring the show this actually could be a possibility. Hasbro seems to have big plans for the franchise. Here’s what the toy company had to say:

“Power Rangers is an iconic brand built on a heritage of great storytelling and merchandising with tremendous upside potential when fully executed across Hasbro’s Brand Blueprint,”

Hasbro has done a great job at redefining The Transformers brand with their new film Bumblebee, which seems to be a soft reboot. We know that a Snake Eyes solo film is in the works at AllSpark, Hasbro’s production company. It would make sense to expand on Power Rangers’ most popular character. Frank even shared a photoshopped picture of himself looking like he does in the graphic novel.

We did reach out to JDF for a comment about turning Soul of the Dragon into a spin-off show. Here’s what he had to say:

“It’s time for it. It’s something that the older fans can relate to and be proud of. Kyle (Higgins) and Boom! Studios did a great job with the graphic novel and gave the Green Ranger an end. It’s time for Tommy to pass on the shield.”

Earlier this year, JDF returned to the show as Tommy Oliver in Dimensions In Danger, the 25th anniversary team-up that was done by Saban. Many feel this was a missed opportunity from the previous owners of the show to not use their most popular villain that they created in the Boom! Studios comic, Lord Drakkon, which ironically is also based on Jason David Frank’s Tommy character gone evil and never seeing the light. Hopefully Hasbro can learn from Saban’s mistakes.

This is something fans want and the franchise needs. With the recent purchase of the Power Rangers by Hasbro, there’s been an excitement around the franchise. There’s no better way to make an impact then by giving us a Power Rangers spin-off for the old school fans. We’d love to see this as a streaming show on Netflix. Most young kids nowadays are experiencing Power Rangers for the first time via streaming so hopefully Hasbro recognizes that.

Hasbro has stated they wanted to unlock the full potential of the series.

“Shortly after entering into our licensing arrangement, it became clear that now was the time to begin investing in unlocking Power Rangers’ full potential…”

It’s one thing to get fans excited but it’s another to keep them excited. This year alone we’ve seen the Power Rangers franchise do so much more than just being a kids TV show and selling toys. The Boom! Studios comic is arguably one of the best superhero comics on shelves today. Kyle Higgins gave older fans exactly what they wanted from Power Rangers. Lord Drakkon might be the best villain the series has ever seen. A spin-off about Drakkon would be amazing. Kyle Higgins wrote and directed a short starring Jason David Frank about the character but we’d love to see that flushed out.

Let’s also not forget Power Rangers Hyperforce and the video game Legacy War, which crossed over with the Street Fighter characters. The brilliantly talented folks over at Bat in the Sun brought us shorts that took place in that universe and they were stunning to watch. All the way down to the costumes they crafted and stunts they executed, the folks over at Bat in the Sun would be a great way for Hasbro to “unlock Power Rangers full potential.” They even brought back former Ranger Ciara Hanna, from Power Rangers Megaforce to reprise her role as Gia. It would be great to see Tommy and Gia trapped in another universe with Ryu running into former Rangers!

If Hasbro wants to unlock Power Rangers full potential then this would be the start long time fans have be hoping for. What do you guys think of a Soul of the Dragon spin-off? Leave a message in the comments below.

Did you say Power Ranger and Street Fighter team up?  … 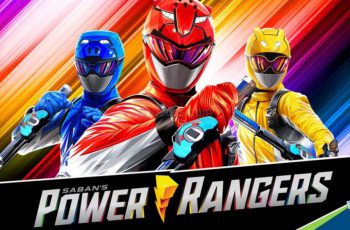 The neo-Saban era of Power Rangers ushered in the super …