THE MASTER VS THE DOCTOR

Fans of Doctor Who, Derek Jacobi as The Master, or the Eighth Doctor rejoice!  Sir Derek Jacobi will be reprising his role of the Master in the Big Finish audio adventure The War Master: Rage of the Time Lords.  Paul McGann will also return as the Doctor to oppose his old nemesis.

Even though Derek Jacobi only played the Master once on television, in the Doctor Who episode “Utopia,” his performance has stuck with fans ever since.  The War Master: Rage of the Time Lords will be the third series of The War Master audio adventures made in association with BBC Studios. It will contain four new stories starring the Master during the Time War: “The Survivor” by Tim Foley, “The Coney Island Chameleon” by David Llewellyn, “The Missing Link” by Tim Foley, and “Darkness and Light” by David Llewellyn.

“This incarnation of the Master is very much the ‘Hannibal Lecter’ of Time Lords – intelligent, charming, but thoroughly ruthless,” said producer and director Scott Handcock. “We had a lot of fun in studio bringing the War Master back to life! It’s been a gift of a project, and we can’t wait for listeners to hear it.”

Sir Derek Jacobi first returned as the War Master in the 2017 audio adventure The War Master: Only the Good.  “I didn’t expect to come back to it all these years later but I was thrilled to be remembered,” he said in 2017. “The plots in all these episodes have been very good indeed, very interesting, very dramatic and beautifully written. The whole process has been a delight!”

With all of space and time in chaos, the Master plots his most audacious project yet. Only one other Time Lord has ever been able to stop him. But where is that Time Lord when the universe needs him?

This new series of adventures take the Master into darker terrain as he gathers his forces against the Daleks in one of his most nefarious schemes to date. Will the Doctor stop him? Will he want to? Or has the Master’s deadly scheme proved too great to be controlled…

This Fall, Jodie Whittaker is taking over the mantle as … 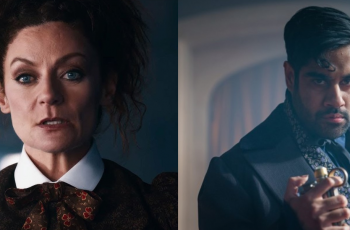 Time Lords are supposed to have thirteen lives…but The Master …