The problem with being a one trick pony is that at first its something cool and new, but when one keeps doing it, you eventually get a dead horse that you just keep beating. Thus is the tale of M. Knight Shamalan. Glass reviews are coming in and the movie is falling somewhere between foundering and glue factory.

Shamalan’s early works were cool BECAUSE of his endings. I was bored with Sixth Sense until the ending. Then I had to watch it 20 times to find all the stuff I missed. His next movie or two followed this pattern, but it got to the point where five minutes into the movie i could tell what the twist was and it was a bore. Shamalan went from star to the Sham-hammer. His name became synonymous with trash movies.

Then in January of 2017 a little film snuck into theaters and blew viewers away. Split show cased the incredible acting range of its main star James McAvoy. The story was solid, and the ending twist was nothing major to the movie but more to the sequel’s layout. This amazing film was going to sweep back around and connect to one of Shamalan’s early hits Unbreakable. Sam Jackson, Bruce Willis and McAvoy would team up for a superhero sequel called Glass! What could possibly go wrong?!

A great deal apparently. The review embargo was lifted a couple of days ago and while not resoundingly negative, they aren’t exactly on the bright side either. With 39 critic reviews in, Glass currently sits at a mere 39% on Rotten Tomatoes. Critics and audiences rarely agree on film scores, so scores are often ignored. There are a couple red flags here though if you ask the right questions. 1. How consistent are the complaints? 2. Does this fit with history?

In this case complaints and complements alike are fairly well lined up. The actors are highly praised for their performances. The weaknesses and let downs are more contributed to Shamalan and either the script or the directing.

The second flag is how consistent are the negatives with past performances. In this case they are again echoes of the past. The movie is receiving praise, especially for the first half roughly. It is the ending that critics are panning, and that is where Shamalan has been having issues with past movies. The endings just don’t work or are so obvious its boring.

Kristian Harloff over at Schmoes Knows had this to say about the ending. “But by the time we get to the end, the end is make or break, and by the time the end went, I went ‘meh’ *shrugs shoulder*.”

John Rocha and Jeff Sneider over at Collider were overwhelmingly positive with their review, but even they mentioned where people are going to find the most problems with this film were later in the viewing and the ending.


Surely, Shyamalan’s dialogue has plenty of clumsy moments. Especially in lines assigned to Dr. Staple and Mr. Glass, we can hear the filmmaker himself, spelling out his thoughts about what comic-book mythology means and how the realists of the world explain away things they can’t understand.

Shyamalan remains an ambitious, interesting director, shooting close-ups with Dutch angles and embuing even the talky scenes with a palpable sense of trepidation. But his writing here often doesn’t hit the target; where Unbreakable was a smart, simmering deconstruction of comic-book tropes, Glass veers towards the heavy-handed, with characters disseminating his ideas through clumsy dialogue.


If you have any friends who are particular fans of this curious and turgid series, I suggest you see Glass with them, as their enthusiasm for all of the film’s onanistic insistence might prove infectious. It did for me, anyway, and I left Glass feeling less annoyed by Shyamalan doing his thing than I may have in the past. It’s actually a little fun to have him around again, demanding our awe.

If that isn’t the text book definition of back-handed complement. The actors are hands down the bright spot of this film and most everyone seems to enjoy the first half of the film. Whether you want to see this movie depends on how much faith you can put in Shamalan’s ability to end movies. Given the brilliance of McAvoy’s performance, any ending, no matter how bad, would make this movie worth seeing.

With a low total box office and no competitive new … 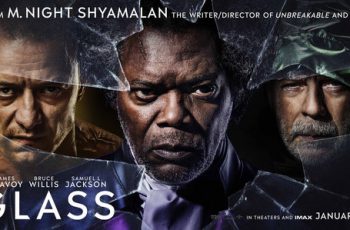 GLASS 2019 To build anticipation for Glass, Universal Pictures has …