Dangerous business? More like boring business. Star Wars Resistance is trying very hard to be something. As the season grinds on, however, it seems more and more like it doesn’t know what, exactly, it’s trying to be.  Resistance episode 12, ‘Dangerous Business”, hasn’t helped its cause.

Kaz does his best to help out around Yeager’s garage, trading his services to Acquisitions shop owners Orka and Felix for parts for the Fireball. His task? Kaz must run the shop while they are away for a day. It goes about as well as you’d expect. Unfortunately.  I want to like this show so badly, and it showed promise with the mid-season trailer. Sadly, Resistance episode 12 still hasn’t delivered in the second half of the season.

While Kaz is working, a shady customer by the name of Teroj Kee comes in asking about a “phase connector”. When Kaz refuses to sell it to him, Kee of course tricks Kaz into leaving the shop. Resistancee episode 12 devolved from there. Tired jokes involving a less-than-originally named creature called “Bitey” ensue. So too does more of Kaz running around screaming. It seems the writers have a very shallow well to which they go when it comes to their storytelling.

Admittedly, Resistance episode 12 did pick up towards the end. After Kee steals the phase connector, Kaz sneaks onto his ship. There Kaz discovers that Kee was secretly working for the First Order, and it was it that wanted the phase connector. We learn that it is a piece of heavy duty mining equipment used to break apart asteroids. Consequently, we’re drawn to the conclusion that the technology might have something to do with Starkiller Base. (Perhaps this is also intended to lead up to The Force Awakens and the cross-over of the two timelines.)

Kaz Comes Through for the Resistance

Kaz, with some quick thinking, brings the ship down to deprive the First Order of its prize, and… that’s it. End of Resistance episode 12.  Yes, it ties to the First Order. Yes, we got to see BB-8 in action. But for a Star Wars show, Resistance unfortunately continues to rely too much on superfluous material and fails to hold the viewers’ attention to the main story line.

However…. we did see glimpses of what’s to come in episode 10 and the mid-season trailer. Enough with clichéd storylines and tired comedy – get on with the show already. 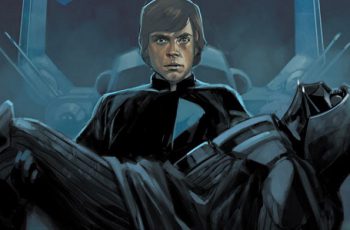 There’s been a lot of talk about what role Luke …

If there has been one constant in Star Wars, it’s …