For being a title for the younger generation, this issue of Young Justice is a bit scattered all over the place. Linear is not the type of story being told. We bounce through most of the new team in this issue, but the problem is, the team is scattered all over Gemworld.

I love both covers for this issue. They are simple and straight forward, but very cool depictions of the Young Justice Team, including the newest member, Amethyst. Both have a very “fun” feeling to them.

We start off with a group of the bad guys of the planet conspiring to overthrow, and decapitate, Princess Amethyst. You can tell this is meant for younger kids, where normally this scene would be dark and menacing, it is very tongue and cheek. One wants the Princess’s head while the other baddie responds: “What? like in a box?” Whatever their plan, it doesn’t seem relevant as Robin and the Princess come smashing into the meeting. Of course Robin is screaming Yahoo! as he rides a gem encrusted unicorn.

We jump to the next page and Jinny is a bit panicked as something large and green just fell on her truck. When it neither talks back nor gets off her truck, she grabs her trusty shot-gun! Funny she would grab that over the ray gun on the seat couch next to it.

Enter Cassie. Cassie and Ginny have a Q & A on each other’s identities before we jump back in time to Cassie beating up on Despero. I love how Despero is insulted by being beaten by a nobody girl when he is meant for the Justice League damn it!

Her nobody status is driven home in the next few panels by questions from a cop and people gathering to see the battle. No one knows who she really is until a gray-haired, man stares at her through the crowd. She releases a “#$@#$@#$” and flies off with the old man.

Turns out the old man is none other than her grandfather Zeus. Zeus apologizes for being absent and talks of wanting to restart their relationship. The problem is the timing and reasoning do not sit well with Cassie. Zeus offers Cassie a necklace that, when combined with the bracers and lasso, grant her full membership to the Pantheon.

Again Cassie cannot figure out why he is doing this here and now. She is a nobody. She has done nothing, yet she is being gifted this tremendous gift. We are told to never look a gift horse in the mouth, but the problem is one should also be careful for what they wish for. They just might get it. Cassie wants to earn her way in life. Thus, she gives back the necklace, saying she will come for it when she has earned it.

Of course Zeus looks pissed. Cassie is correct that something has to be going on with the Gods, but we are not told what – yet. This feels like only half of Cassie’s story. She was reluctant to get into the fight back in the city. Something inside was holding her back. I guess her story is something we will get a few pieces at a time.

We are jumped back to the present predicament. Cassie talks through things with Ginny as Teen Lantern wakes. Cassie suggests they figure out what is going on together. Off they fly, of course one can’t leave the truck behind! Teen Lantern flies off with his construct. Cassie carries the truck. with Jinny inside.

Everything seems to be going well and they should have answers shortly. That is until a certain boy wonder and his unicorn crash into the truck. Instead of a harrowing fall to their deaths, they fall safely into Teen Lantern’s construct of pillows. Everyone meets each other, including Amethyst, and again things are great! Right?

Of course not! Here comes the big baddie of the planet – Lord Opal of Gemworld. It would be nice to think that next issue we are going to see a giant throw down between Lord Opal and the group, but the next issue leads with a title about Beast Boy and Conner Kent.

Whether we get one or both, the next issue should be more Young Justice fun!

The countdown to DC UNIVERSE is down to weeks. To … 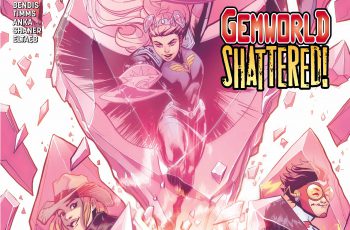 Young Justice #5 took me a second read through to …