Eric Saindon is an American visual effects supervisor for movies, including Pete’s Dragon, The Hobbit trilogy (2012–2014), and Avatar. He’s also worked on others, such as: King Kong; The Lord of the Rings Trilogy; Supernova; and Star Trek: Insurrection. His talent is evident; films of which he’s been a part have garnered ten-plus Academy Awards. He’s even earned two Oscar and three BAFTA nominations himself. Eric took some time to talk to us about the intricacies that went into making Alita: Battle Angel work so well.

That Hashtag Show: Set this up, because the visual effects are fantastic on this movie. I mean, seriously, one of the biggest things that stuck out to me of course was just how much of a feast this movie is on the eyes. I’ve seen other movies that do have a lot of visual effects but this one really stood out the most.

THS: In regards to creating the look for the whole movie, were there any qualities that you were trying to bring from the anime or the manga and how did you go about merging those qualities? If that was the case.

Eric: A lot of the look and if we went with like the feel of Iron City, going through the manga and working with Jim Cameron and Robert Rodriguez. Jim had started artwork back in 2005 on this and he talked to actually Kishiro about the thoughts on the city itself. What cities in the world would actually be very similar to his ideas, his thoughts on it because coming from the manga itself, sometimes it’s hard to interpret what that might be. And he actually came up with cities that he thought would be a very similar look like Panama or Grenada or any of these like sort of South American cities that have that feel of, not a sci fi looking city but a very grounded city a very lived in the city and that’s the feel that they really came up with that they wanted to make this feel like. So we used that idea and use actual OSM data which is like street data and types of buildings and size of buildings. We use actual data from these cities to design out and to lay out our Iron City itself which i think that helps ground our city in a real reality because it laid out the districts of the city, the areas to help us to ground it in real city. As far as like character designs we really took a lot from the manga itself like Alita’s cyber body she gets is really taken from the manga. You really have to take different pieces because there’s not really one frame in the manga that shows her body and the detail you need. But then there are some wider shots that have the basic idea of her body. But then as you go through, you find all of these shots of close ups on her hands and you take all of those moments and put them together to try to come up with a cohesive 3D model that works for our Alita character.

THS: Talking about the Alita character, the intricate detail on that first body that she had was amazing. Especially when you get some of those close ups of her hands and her forearms, and the design work that went into just the etchings that were on her arms – it really popped the 3D, actually; it really, really worked in this movie. I know it was filmed in a native 3D it wasn’t all done in post, I believe.

Eric: Yeah, that’s really what makes the difference though, right? Like hardly anyone is actually filming native anymore. And it’s unfortunate because with native, you actually see the roundness of someone’s face. You see the depth of detail, it works like your eyes work. I mean the post conversions they get us sort of an idea of 3D film but it’s not actual 3D it’s just playing the detail. It gives you the fake 3D that you can get from Facebook. Native 3D just gives you that extra depth of detail and that it’s more of an immersive experience that you can really get into.

(Eric would go on to discuss the process of making Alita come alive.)

Every medium has produced great and awful science fiction, and … 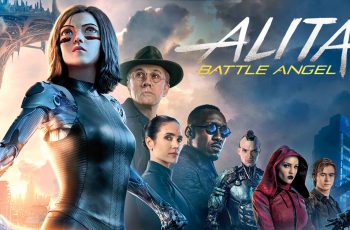