“It’s as if a million voices suddenly cried out in terror.” You might remember when Obi-Wan said this many years ago in Star Wars: A New Hope after the Death Star destroyed Alderaan. But if you were like me and countless other Star Wars fans across the universe a year ago, that was exactly how we felt after witnessing Kanan Jarrus‘s fate in Star Wars Rebels Season 4, Episode 10, “Jedi Knight.”

Who Was Kanan Jarrus?

Kanan started his Jedi training when he was young and was also known then as Caleb Dume. He was a padawan to Master Depa Billaba. When Order 66 was executed Master Billaba ordered Caleb to run and sacrificed her life to save his. For years he wondered and hid. That’s when he became Kanan Jarrus. We may have never got to learn about if it wasn’t for him meeting Hera Syndulla on Grose. That meeting sent Jarrus on a new path where he became strong with the force. Kanan didn’t just become a Jedi. He also found a family within the Ghost crew, a Padawan named Ezra Bridger and the love of his life Hera.

Did Kanan See His Fate?

While nothing showed he exactly new what was going on, Kanan seemed to have an idea that something big was about to happen. “Jedi Knight” opens up with Kanan asking Ezra to come up with a plan to save Hera. Kanan knows that his feelings for her will cloud his judgement and foil any rescue attempt he could design. So, Ezra comes up with a plan and gets the Ghost crew inside the Imperial Base where Hera is being held. There, Kanan is able to save Hera. Besides saving Hera the team has a chance to destroy the fuel depot that was supplying Thrawn’s TIE Defender facility. Before the attack, Kanan tells Hera “There is something I need to tell you.”

We didn’t get to hear what he had to say, but you just knew they were in love.

Kanan The Jedi Knight Is Dead

Fans will never forget Hera yelling Kanan’s name when he Force pushed her to safety as he fought off the wall of flames. Yes, the attack was successful, but it came at a great cost. As one of the fuel depots exploded, the fire from it was on a path to destroy the Rebels transport and their chance to escape. That’s when Kanan Jarrus uses the force to hold back the fire and save Hera. Tearfully, she attempts to stop him and confesses her love for him. There we see Kanan’s eyesight return as his eyes change back to their natural color. In heartbreaking fashion, the last thing he saw was the love of his life, Hera. Kanan sacrificed himself to save his family.

We know that Kanan’s death plays a big role in the final season of Rebels. Kanan Jarrus did as his master did years ago; he sacrificed himself so the others could complete their mission. He has become a Jedi whose story will be told, a story about how he help save the Rebels so they could continue their fight against the Empire.

What did you think about the death of Kanan Jarrus? Would you of like to seen Rebels continue? I know I will never forget that episode and the impact it had on me with the rebels series. Let us know by hitting us up on Twitter @thathashtagshow and myself @starwarsnerd574. Also stay up to date on all Star Wars news by following us at ThatHashtagShow.com.

Even the casual Star Wars fan these days knows the … 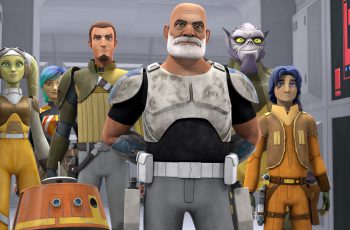 These past few weeks there has been a lot of …