Brie Larson stars in Captain Marvel as one of Marvel Comic’s most powerful and popular characters. She leads an all-star cast including Samuel L. Jackson, Jude Law, and Annette Bening.  And she will also reprise the role in the summer blockbuster Avengers: End Game. Larson talks about her love of the character and the intense training she underwent for the film.

At a press conference in Los Angeles, Larson explained what she loved about the character. “There’s a lot to love about her, which is why I was really excited to do this in particular; the idea of playing a superhero, or a female superhero in particular, because my interest is in female complexity. I was a little worried about playing somebody, a superhero that would be perfect, because I don’t feel like that’s realistic, or something aspirational at all.  In particular, even with my job, like you could just see this beautiful finished product where I look great, maybe in your opinion [LAUGHTER]. But you don’t know all the other takes that are on the cutting room floor where sometimes I physically landed on my face doing stunts — and sometimes I just do a bad take.  It’s just how it goes.”

“So, getting to play a character where the whole character arc and turn of this is watching her be this major risk taker. Which means it’s not always going to work out the best.  And those are the moments, the defining moments of her character, where she doesn’t lay down, she gets back up.  I mean, that’s everything.  That’s for everybody.  There isn’t a person who can’t relate to that, I don’t think.”

Larson was then asked, during training for the film, if she ever had days where she needed to pick herself up and find that something extra. She responded, “Yeah, all the time [LAUGHTER]. All the time.  You’ve been training for that many hours every day for nine months, like every day, I was just like, I’m amazing — like I sobbed in the gym many times.  My trainer would be like, ‘Oh, she’s crying again.’  It’s very emotional when you’re kind of stirring up something very vulnerable and raw inside of you. And you’re also learning that it’s just for you; there was nothing for me to prove.  I wasn’t proving it to other people at the gym.  I certainly wasn’t proving it to my trainer, because he was never going to be fully impressed; it’s his job to not be impressed.  It was for myself.”

“I’M STRONGER THAN I REALIZED”

“And for me, the main reason for doing it was so that in moments like this when we’re talking about Carol’s strength and we’re talking about, you know, what I learned from her, it’s that I’m stronger than I realized.  Of course, this movie is like assisted with the VFX, because I can’t personally shoot photon blasts.  There’s not enough prep in the world for me to do that, yet — but I will figure it out if there’s a way.  But I can stand here and say that I am really strong; I was able to dead-lift 225 pounds, I was able to hip-thrust 400 pounds,  I was able to push my trainer’s 5000-pound Jeep up a hill for 60 seconds.  So, this concept, when it comes to like gender norms or what the human body is capable of, or in particular maybe what a female body is capable of, it’s capable of a lot, you know.” 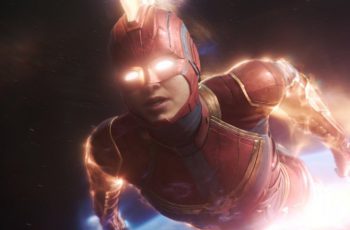 There is good news for Captain Marvel fans: Marvel Studios …