Fans were understandably excited when Disney and Lucasfilm first announced a live-action Cassian Andor series for Disney+. Rogue One: A Star Story is widely regarded as the best of the Disney-era Star Wars films. (Some, like me, even say it’s one of best of the entire franchise.) Notwithstanding, studio execs were noncommittal about whether or not smart-talking droid K-2SO would appear in the series. Fans, of course, found the studio’s response vague and unconvincing. That’s not the case any longer, however. Yesterday Lucasfilm president Kathleen Kennedy confirmed that Alan Tudyk will be back as the voice of K-2SO.

This incredible news comes fast on the heels of Disney’s major Disney+ announcement yesterday. The new streaming service premiers November 12. With it comes The Manadalorian, the first ever live-action Star Wars series. The Cassian Andor series will follow in 2021. Both Diego Luna and Alan Tudyk will reprise their respective roles.

Alan Tudyk solidified his standing as a sci-fi standout with his portrayal of “Wash” in the Firefly series and following Serenity film. (For example, who can forget the dinosaur toy monologue? Similarly, how about “I am a leaf on the wind”?) His spot-on comedic timing and quirky personality quickly endeared him to fans. Further, his quirky personality translated easily to Star Wars. Applying that talent to the sarcastic and cynical, reprogrammed Imperial security droid K-2SO created one of the now most beloved droids of the franchise. As a result, K-2SO is back.

Importantly, Luna and Alan Tudyk developed an incredible chemistry between their characters in Rogue One. Starwars.com describes the new series, saying “[t]he rousing spy thriller will explore tales filled with espionage and daring missions to restore hope to a galaxy in the grip of a ruthless Empire.” Rogue One clearly establishes a close relationship between Andor and K. Consequently, telling a Cassian Andor spy story would certainly be hard to do without K.

Alan Tudyk responded on Twitter to a Disney tweet announcing K-2SO’s return. Of course, he did so in typical Alan Tudyk fashion:

Fans were already excited for The Mandalorian’s premier in November. I may now be just as excited for this , knowing Alan Tudyk is definitely on board. Production for the Cassian Andor series begins this October, so expect the series to premier sometime mid-year in 2021.

Well, it seems we might just get that Obi Wan … 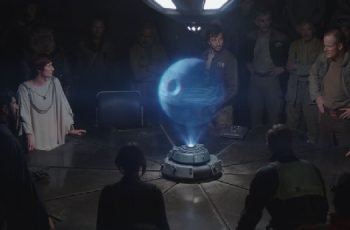 Despite all the talk about The Rise of Skywalker recently, …