Forgive us if we can’t stop talking about the Star Wars: The Rise of Skywalker trailer. There is so much to digest from those two minutes, and every bit is more intriguing than the last. From implications that Rey is training with Kylo Ren, to confirmation of Palpatine’s return, there is some juicy tidbits into which we can sink our teeth. None, however, may be as interesting as one scene that hints at Rey’s parentage. I’m calling it now: Rey’s parents are somebodies, and they (or at least one of them) will be in The Rise of Skywalker.

Before we get to the trailer, we have to take you all the way back to The Force Awakens. Rey has a Force vision in Maz Kanata’s castle in which she sees her past. We presume that a ship speeding away from Jakuu is that of Rey’s parents as they leave her behind with Unkar Plutt. Rey remembers, and sees the ship clearly as if it happened yesterday. A driving theme through both The Force Awakens and The Last Jedi is Rey’s desire to know her parents’ identities, and her own. Now fast forward to The Rise of Skywalker.

Rey’s Parents Appear in the Rise of Skywalker Trailer

About a third of the way into the trailer, we are treated to a scene of a ship arriving at a city in the mountains. (Incidentally, the location looks remarkably similar to that of Eadu as seen in Rogue One: A Star Wars Story.) It’s not the location that’s important; it’s the arriving ship. Here is a standard image of the scene:

And now here is an enlarged photo of the arriving ship. It looks awfully familiar, doesn’t it? From the twin engines to top fuselage ridge in between, the ship in the Rise of Skywalker trailer bears a striking resemblance to the one Rey say in her vision.

Yes, I’m calling it now. Those ships are one and the same, belonging to Rey’s parents. And the pilot? Rey’s mother. I’m also still holding out hope that my theory will come true. That is, namely, that Mara Jade will make an appearance in Star Wars: Episode IX as Rey’s mother. Hey, rebellions are built on hope, why not film aspirations? In any event, watch the trailer for yourself and tell us what you think:

Stay tuned here to That Hashtag Show for all your Star Wars news as it happens. 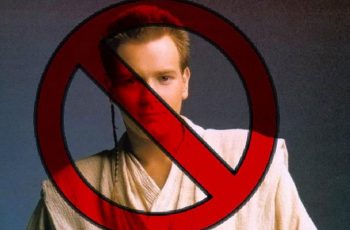 Ewan McGregor for most Star Wars fans, regardless of how …
With all of the blockbusters that have come and gone …