**UPDATE** You can see the “official” teaser trailer shown after today’s panel at the end of this article.

Star Wars fans were excited for the Star Wars Celebration Episode IX (The Rise of Skywalker) panel yesterday. (You can watch the trailer for that HERE.) However, many more were just as excited for The Mandalorian panel today. Their enthusiasm and anticipation was rewarded. We now have the first footage from the first ever live-action Star Wars series. (Footage starts around the 18 minute mark.)

Older fans like me have been waiting for a live-action Star Wars series ever since Han, Luke and Leia first appeared on screen in 1977. It took over forty years, but based on what we’ve seen and heard, it’s worth the wait. And Disney couldn’t have placed The Mandalorian in better hands. Showrunner Jon Faveau was single-handedly responsible for kicking off the MCU with Iron Man. His impressive pedigree earned him a $100 million budget for The Mandalorian’s first season. Disney+ has already picked the series up for a second season.

The Mandalorian Debuts November 12 on Disney+

In conjunction with Star Wars Celebration, Disney announced details about its upcoming streaming service this weekend as well. The platform will launch November 12. Likewise,The Mandaloriain will launch with it. Similarly, a second, live action Star Wars series focused on Rogue One’s Cassian Andor will follow likely sometime next year. (Returning for that, together with Diego Luna, will be Alan Tudyk as K-2SO.)

The Mandalorian stars Pedro Pascal and will follow the title character through his adventures in the Outer Rim. Set in the time after Return of the Jedi, the show will feature some old Star Wars friends. Favreau revealed through Instagram that droids R5-D4 and bounty hunter IG-88 will appear in the series. Joining Pedro Pascal are Gina Carano, Carl Weathers, Nick Nolte, and Hollywood legend Werner Herzog as the show’s antagonist.

Check out the ” official” trailer shown after the panel here:

Stay tuned here to That Hashtag Show for more information on The Mandalorian following the panel, and for all your Star Wars Celebration and general Star Wars news. 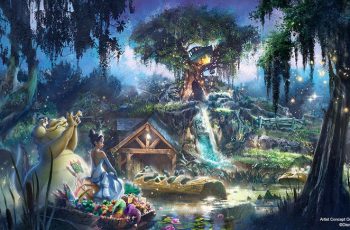 Splash Mountain is going to get a facelift. Whether you …
Warning: Article contains minor spoilers for both canon films and …