Simon Pegg is a geek hero. Setting aside the major franchises of which he’s been or will be a part (Star Trek, Star Wars, Mission: Impossible, The Dark Crystal), he is perhaps most loved for the cult classic Shaun of the Dead. Together with Nick Frost, he put a comical spin on the zombie genre that enamored him to the masses. Fans so loved the movie that Pegg once joked about writing a sequel, with vampires. Sadly that never came to pass. But fear not, fans! We can tell in this exclusive to That Hashtag Show that Pegg is getting his vampire movie, after all.

Married couple with a tumultuous history plan one last heist to finance their divorce, revealing halfway through the robbery that they are vampires.”

Simon Pegg is attached to star as Robert Parker, a bank robber with “an expensive suit and cheap moustache”. The character is “married to Etta, and is the father of Diego. He constantly snipes at Etta and is doing the bank robbery to fund a divorce from her.”

Granted, it’s not a sequel to Shaun of the Dead. Notwithstanding, based on the film’s and Pegg’s character descriptions alone, My Only Sunshine has all the trappings of another Simon Pegg masterpiece. Making the vampire heist caper (set in Montreal) even more interesting is potential casting for Etta: Rebecca Ferguson.

The production has offered Swedish actress and Simon Pegg’s Mission: Impossible co-star Rebecca Ferguson the role of Etta. Etta is a “bank robber who is more ’sexy than she is beautiful.’ She is married to Parker and turned Parker’s son Diego into a vampire to get back at Parker.”

Ferguson will also star in the upcoming Dune reboot. It’s her work with Pegg in the Mission: Impossible series however, that gives this project so much promise. The two had fantastic chemistry working together in those films, especially Rogue Nation. Here’s hoping they get to work together again for this project.

Stay tuned here to That Hashtag Show for more information on My Only Sunshine, Simon Pegg, and Rebecaa Ferguson as the film progresses. 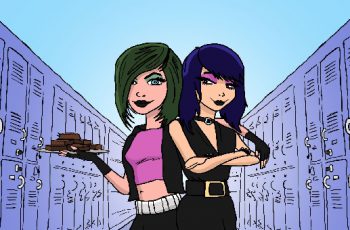 It’s been a long time since Buffy & Co. got …
DarkCoast and White Wolf Entertainment presents WORLD OF DARKNESS: the Documentary – coming to …